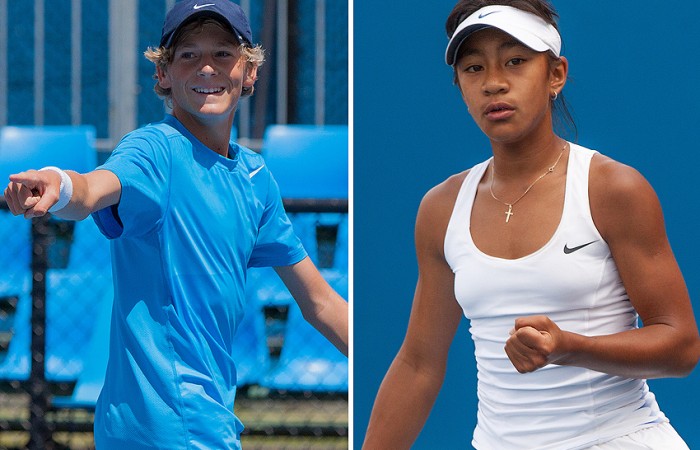 Destanee Aiava and Max Purcell have been declared the champions of the girls’ and boys’ Optus 14s Australian Championships for 2012 following their straight set finals victories on Sunday.

First up on Court 5 was the showdown between 12-year-old Victorian Aiava and New South Wales’ Seone Mendez.

Mendez, playing in a vintage dress from the 1960s, began on serve but despite her precise groundstrokes which at times merely clipped the sidelines, a double fault at a critical point allowed Aiava to claim the first game.

The calm and collected Aiava began the second game with a significantly greater level of confidence, demonstrating her signature solid forehand to comfortably hold serve, a trend which would continue throughout the match.

Yet as the match wore on, the Victorian proved the stronger of the pair, with Aiava going on to claim the match 6-3 6-3.

“I’ve been working on staying calm, focusing on the next point and just moving on,” Aiava reflected after winning the final.

It has been a successful year for Aiava, having won the international Longines Future Tennis Aces Tournament at Roland Garros last June, her prize being an exhibition doubles match alongside women’s tennis legend Steffi Graf.

The wind picked up as the boys singles final got underway, with Max Purcell off to a convincing start by comfortably taking command of the match thanks to a 4-0 lead. He went on to take the opening set 6-4.

His opponent, Richard Yang, exhibited some beautiful drop shots, his precision helping him send the ball merely skimming the edge of the white tape before almost rolling onto the other side of the net.

Purcell, however, cleverly played to Yang’s one-handed backhand, recognising it as a potential weakness in his game. He also began to play Yang’s own game of drop shot winners against him, clinching a 4-2 lead in the second set.

Continuing to set up points effectively, it was not long before Purcell claimed the second set 6-3.

“I feel really excited. That was my second nationals and it was the one I wanted to win because it’s the big Melbourne showdown,” Purcell said.

Purcell’s short-term goals include achieving the top ranking in his age group in Australia and to gradually improve his ITF ranking.

“I want to live tennis, I want it to be my occupation when I’m older and I want to coach after that. I love it.”

Purcell offered some excellent advice to younger uprising tennis stars to take on board.

“If your attitude drops, your game could drop.”