It was a day for the home town teams in the finals of the 14s Teams Championships with Victoria taking out both the boys’ and girls’ titles. 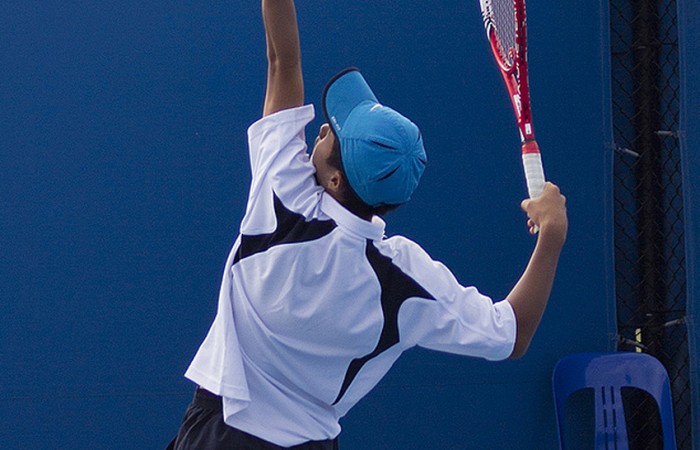 It was a day for the home town teams in the finals of the 14s Teams Championships with Victoria taking out both the boys’ and girls’ titles.

Richard Yang got the boys’ top seeds off to a flying start against New South Wales when he defeated Alex DeMinaur in emphatic fashion, 6-2 6-1.

Yang looked in complete control from the onset, using his slice backhand to great effect cruise to a 5-2 lead in the first set.

It was much the same in the second set as Yang was able to run DeMinaur around the court before taking out the opening rubber for the Victorians.

The second match was anything but a one-sided as New South Welshman Bernard Nkomba – or “B-man” as he is known to his teammates – posted a 7-6 6-1 win over Victorian Daniel Nguyen.

Nguyen dominated the match early before Nkomba managed to find his touch, taking the first set in a hard-fought tiebreaker.

As the match progressed, Nkomba grew in confidence, eventually taking out the final set 6-1 and keeping the hopes of the New South Wales team alive.

The deciding doubles rubber was charged with energy and adrenaline as both teams were desperate to get the win.

New South Wales took the early advantage in the match with Alex DeMinaur and Kody Pearson leading the charge against Mike Vaughan and Daniel Nguyen to take the first set 7-6.

But a spirited Victorian side would not lie down, fighting back to win the second set 6-3 and forcing the match into a super tiebreak.

It was an intense decider with Victoria pulling off a remarkable victory 12-10 to take out the Sproule Stephens Trophy.

Speaking after the match, Nguyen said it had been a successful week for his team.

“We had some solid wins and some ups and downs but we got up in the end which was good,” he said.

Inglis got off to a flying start after securing the break in just the second game to take a 2-0 lead. But it was short-lived as Aiava mounted a comeback, winning the next three consecutive games to fight her way back into the set.

The set quickly escalated into a see-sawing encounter with neither girl able to break away with a clear advantage. Just when it looked like Aiava was going to serve out the first set, Inglis produced a magnificent fight to take the scores to 6-6 and enforce a tiebreaker.

Eventually it was Inglis who was able to maintain her composure and secure the first set.

The second set was significantly more one-sided as Inglis surged to a 4-1 lead before taking out the match.

In the second singles match, Western Australia looked to be in control of the tie and on the verge of claiming the Mary Hawton Trophy when Sasha Bollweg won the first set of her rubber against Michelle Pits 6-3.

Pits could have been excused for succumbing to fatigue following a difficult match in hot conditions yesterday but the teen fought to get herself back in the match with solid attacking play.

The Victorian mounted an inspired comeback in the second set, throwing in the odd slower ball on her way to posting a 6-0 score to force the match into a deciding third set.

Pits maintained the momentum she had built in the second set to win the decider 6-4, squaring the tie at 1-1.

With the tie coming down to the doubles it was the Victorian combination of Aiava and Pits who dominated posting an impressive 6-0 6-2 score over Inglis and Bollweg.

Pits, who was instrumental in the doubles decider, said she was proud of her team’s effort.

“I think we did really well in competing today even though we lost the first rubber. I think I did pretty well in fighting for my out tie and we just smashed the doubles,” she said.

Victorian Team Manager Andrea Stoltenberg was also full of praise for the girls.

“I was very proud of the effort everyone put in the whole week, the girls were amazing (and) they worked so hard,” she said.

“They played fantastic doubles, that was definitely the best doubles I have seen them play the whole week.”

In the other boys’ results on Sunday, Queensland secured third place beating Victoria B 2-0, South Australia defeated New Zealand 2-1 in the play-off for fifth and sixth, and Western Australia accounted for ACT/NSW 2-1 to round out the competition.

For the girls’, New South Wales defeated South Australia in the play off for third place  2-0, Queensland beat Victoria B 2-0 in the fifth-place play-off and ACT/NSW were victorious over New Zealand 2-1.