Novak Djokovic produced a masterful display over Roger Federer in the ATP World Tour Finals decider to cement his status as the world No.1. 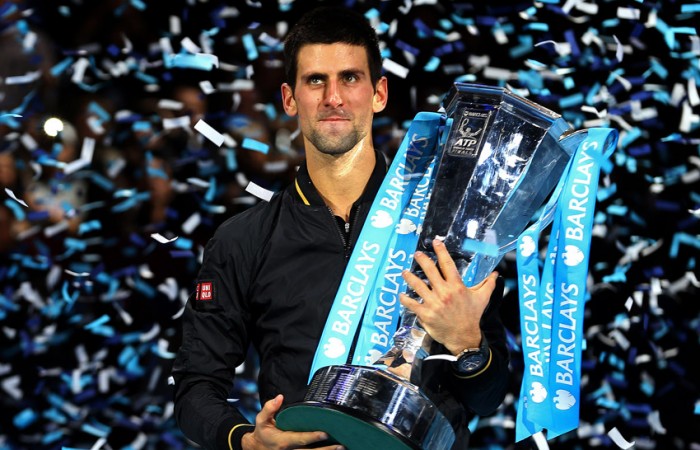 Novak Djokovic produced a masterful display on Monday to end Roger Federer’s reign as ATP World Tour Finals champion as the world No.1 swept to a 7-6(6) 7-5 victory in the decider.

Djokovic underlined why he will finish as the world’s top ranked-player for the second successive year.

The Serb withstood an early barrage from Federer in both sets before overwhelming the six-time Tour Finals winner in an epic encounter lasting two hours and 14 minutes at London’s O2 Arena.

The 25-year-old’s brilliant display clinched his second triumph at the prestigious season-ending event and his first since 2008 when he won the title in Shanghai.

After winning the Australian Open in January and then losing in the finals of the French and US opens, this was the perfect way to end any debate about Djokovic’s right to be regarded as the world’s best.

“It’s always a privilege and a challenge to play Roger,” Djokovic said. “I want to thank my team – I couldn’t have done it without you. I love you!”

For Federer, there was only frustration as he failed to take advantage of some dominant spells.

The 17-time grand-slam champion is the most successful player in the history of the event, having won more titles and recorded more match wins than anyone else.

But even he couldn’t subdue the rampant Djokovic, who handed Federer just his second defeat in eight appearances in the final of the World Tour Finals and only his third loss at the O2 Arena.

For just the fourth time in the 43-year history of the Tour Finals, the top two in the world rankings were meeting in the decider and they produced an enthralling clash that lived up to its billing.

Federer had swept into the final with a dominant display against Andy Murray and picked up where he left off with a blistering start.

He fizzed winners past Djokovic from all angles to take the first nine points of the match, breaking in the second game in the process.

After absorbing that frenzied assault, Djokovic was able to get on the scoreboard when he held serve in the fourth game. He turned the match on its head when he converted a break point in the next game.

With Djokovic in the ascendancy, he broke for a 5-4 lead with a searing forehand winner on the run.

But Federer staved off a set point in the next game and took advantage of that escape to break back for 5-5.

Djokovic needed treatment after cutting his elbow while diving in vain to reach a Federer shot, but he regained his composure well enough to force a tiebreak.

The breaker included a candidate for the best point of the year as Djokovic, on set point, lunged to clip a diving Federer volley past his opponent, only for the Swiss to contort his body and fire a forehand winner past the Serb from an impossibly-acute angle.

But not even that could subdue Djokovic, who broke on the next point thanks to a Federer mistake before blazing a forehand winner to seal a brilliant set on his third set point.

Federer delivered in the opening game of the second set with a break at the fourth attempt.

There was no let-up from Djokovic, though. He kept grinding away and eventually wore Federer down, saving two set points before breaking back to level at 5-5.

Djokovic celebrated by thumping his chest and letting out a defiant roar.

The message was clear. He was coming for Federer and he delivered the knockout blow with a sublime backhand winner to seal the victory on his first match point.