With the big guns of the celebrity world frequently rocking up courtside at the biggest tennis events around the globe, we honour the celebrity tennis fans who occasionally steal the players' thunder.

The ATP World Tour Finals are on this week at the glitzy O2 Arena in London, and as is often the case with prestigious tennis events, the celebrities are out in force. Sir Ian McKellen has been spotted in the stands, as well as fashion designer Roland Mouret, musician Peter Gabriel, former footballer Robert Pires and snooker player Ronnie O’Sullivan.

But these guys are positively small fry compared to some of the big guns of the celebrity world who love to rock up courtside at the biggest and most glamorous tennis events around the globe.

This Friday, we count down the biggest celebrity tennis fans.

The actor, born in Long Island, is a long-time attendee at and supporter of his home major, having been going to the US Open for several years. In fact, the current star of 30Rock has not missed a year since 2007, always a presence in the stands and enjoying the chance to release some steam when the moment’s right. In the second picture he seems to be demonstrating similar intensity to the players he was watching on the opening night of 2012 – Kim Clijsters and Roger Federer – as they demolished their first round opponents.

The Aussie actors enjoyed their time at Australian Open 2011 so much that they were back for more in 2012. Their laughing and joking during the 2011 men’s final – and let’s face it, whatever they were talking about had to be more interesting than the straight-set demolition taking place on court – was replaced with a more serious countenance in the 2012 final as Novak Djokovic and Rafael Nadal enthralled the crowd with their epic five-setter.

The computer software magnate put the screen and keyboard aside momentarily during the London 2012 Olympics to take in the semifinal between Roger Federer and Juan Martin del Potro at Wimbledon’s famed Centre Court. While Gates appears to be enjoying the epic three-set contest that Federer ultimately won, his associate seems disapproving of the advantage scoring system that allowed the match to extend to 19-17 in the final set, thoroughly deflating the Swiss ahead of his gold medal bid … 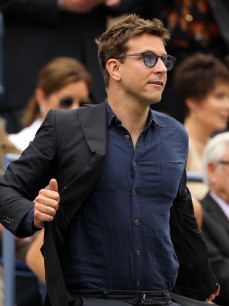 The suave actor was looking sharp as always as he strutted out to Flushing to catch some of the men’s semifinal action at the 2011 US Open. Cooper is another of the glamorous celebrities becoming a fixture in New York during the Open, having attended in 2010 as well. 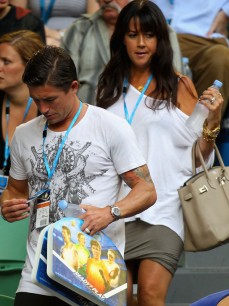 Correct seat? Check. Posterior protected? Check. Soccer star Harry Kewell and wife Sheree Murphy leave no stone unturned as they arrive for the men’s final between Djokovic and Nadal at Australian Open 2012. As well as catching the sublime tennis action, Kewell’s appearance at the tennis also gave him the chance to hob-nob with other stars of the sporting world, including AFL footballer Gary Ablett Jnr.

The revered rapper and record producer is also a serious tennis fan, having made two trips to catch the action at Roland Garros (2010 and 2012) with a trip to the US Open with his equally famous wife Beyonce wedged in-between.

Also making an appearance at the French Open was Jennifer Aniston, yet it seems the American actress – most famous for her decade-long role as Rachel in the hit sitcom Friends – is more intent than the rapper on remaining anonymous …

The Aussie celebrity couple love a trip to the tennis, spotted in the stands at the Australian Open in 2008 for the fourth-round match between Novak Djokovic and Lleyton Hewitt, and clearly enjoying date night with some world-class tennis action to look at between snuggles. Yet when they’re separated – as was the case on their second trip to the US Open in 2012 – all hell breaks loose. Desperately trying to converse and bond but constrained by the unsuitably-placed woman in the middle, the pair can’t take it anymore, leaping across the woman’s lap in a moment of passion.

More reserved and restrained is British super-couple David and Victoria Beckham, appropriately in the setting of the Royal Box at the All England Club in 2012 for the men’s final between Roger Federer and Andy Murray. Less restrained, however, were the gawks directed at the pair as they entered. You can even catch Rod Laver (bottom right) engaging in a bit of photo-bombing.

The British socialite is developing a reputation as somewhat of a tennis groupie, and thus tops our list in this Friday 10 to 1. After stepping out for the grasscourt tune-up in Queens in 2011, Pippa went big, attending Wimbledon at the ATP World Tour finals (top image) in 2011. She was caught again at Wimbledon the following year (second image) before hopping across the Atlantic for several sessions of the 2012 US Open (final image). She seems to be attending more tennis tournaments these days than the famously selective Serena Williams, who went on to win that event. Will we be seeing Pippa at Australian Open 2013?