With Rafael Nadal cementing the year-end No.1 ranking this week, we reflect on the biggest moments in the Spaniard's increasingly glittering career.

With Rafael Nadal cementing the year-end No.1 ranking this week in London for the third time, we thought it appropriate this Friday to reflect on the biggest moments in the Spaniard’s increasingly glittering career.

Nadal quickly asserted himself on the world stage; at just 19 years of age and playing only his sixth Grand Slam tournament, he went all the way to the title in Paris in 2005. His semifinal destruction of world No.1 Roger Federer certainly raised eyebrows – the first of many such wins over the Swiss – and he did not let up in the final, ousting Mariano Puerta in four sets to win the coveted crown.
> watch highlights of Nadal’s SF win over Federer

Many regarded Nadal as simply a clay court specialist, but that perception began to change when he made it all the way to the final at the All England Club in 2006. Although he never faced anyone ranked inside the top 15 to get there, he did see off some impressive opposition, including Andre Agassi in the American great’s last ever Wimbledon match. Federer stopped Nadal’s campaign in a four-set final.

Despite his claycourt pedigree, Nadal would go on to make three straight Wimbledon finals, and after losing efforts to Federer in 2006 and 2007, he turned the tables on the Swiss in spectacular fashion in 2008. Prior to this match, the Bjorn Borg-John McEnroe 1980 Wimbledon final was widely-considered the greatest-ever match. That was until the 2008 decider, a breathtaking display of all-court tennis and momentum shifts, as well as a dramatic finish in near-darkness. Nadal eventually won the titanic struggle 9-7 in the fifth, becoming the first man since Borg in that 1980 final to win the Roland Garros-Wimbledon double in the same year.
http://youtu.be/sLBbn7mEFjk

Nadal continued his spectacular 2008 season in Beijing, romping through to the semifinals and then seeing off Novak Djokovic in a thrilling three-set semifinal. Facing reigning Olympic bronze medallist Fernando Gonzalez in the Gold Medal match, the Spaniard was ruthless, dissecting the Chilean in straight sets to capture a famed piece of both tennis and sporting history. 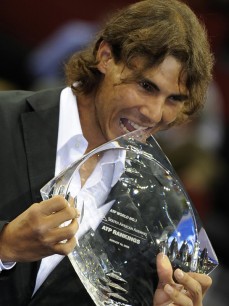 Following that Olympic victory, Nadal captured the world No.1 ranking for the first time in his career. It snapped a record stint of 160 consecutive weeks ranked No.2, and saw Federer displaced from his perch for the first time since early 2004. Nadal would go on to finish the season as the year-end No.1.

Nadal continued his dominance into the new year, capturing his first ever Australian Open title – and first Grand Slam crown on hard court – with his victory at Melbourne Park in 2009. It saw him become the current holder of three of the game’s four major titles, and cement his position as the world No.1. In yet another epic against main rival Federer, the Spaniard won in five sets, a result that reduced Federer to tears in the trophy presentation. A poignant moment from that presentation was watching Nadal comfort his vanquished opponent.

After an injury-riddled 2009 and an injury-induced retirement at Australian Open 2010, Nadal went on a tear. In arguably the most dominant season of his career, the Spaniard again captured the astonishing French Open-Wimbledon double, and thanks to new-found aggression and serving power, went all the way to the US Open title as well. His third consecutive Grand Slam title – Nadal became the first player to win three straight majors in the same year since Rod Laver in 1969 – was his first at Flushing Meadows, helping him complete a coveted career Grand Slam title. It also helped him lock down the year-end No.1 ranking for a second time.

Throughout 2011 and into early 2012, Nadal took a back seat during the rise of Djokovic, who defeated the Spaniard in seven consecutive finals during the period, including at Wimbledon, Flushing Meadows and Melbourne Park. When the two met in the final at Roland Garros in 2012, it was the first time in history that the same two players met in four straight major finals. History was on the line for both – if Djokovic won, it would have seen him hold all four Grand Slam crowns, and complete his career Slam. For Nadal, he was aiming to break Bjorn Borg’s record of six titles at Roland Garros. And over two days and four sets, it was Nadal who prevailed, winning his seventh Parisian crown and writing his name into Roland Garros folklore.

Keeping intact his utter dominance at the claycourt major, Nadal won his fourth straight crown at Roland Garros in 2013 with a straight-set victory over David Ferrer, having beaten Djokovic in a scintillating five-set semifinal. By virtue of the win, Nadal won his eighth French Open title, becoming the first man in history to own eight titles at any one Grand Slam event.

It is quite extraordinary that as recently as January, Nadal was out of the game nursing a knee injury. Yet since he returned to the tour in February after seven months away, he hasn’t looked back. The statistics are extraordinary – 13 finals from 16 tournaments and winning 10, including the French and US Opens (the latter his most recent title). A win-loss record of 71-6, including 29-2 on outdoor hard courts. Such results have helped the Spaniard cement his third year-end No.1 crown, making him the first player in history to twice hold, lose and return to the year-end No.1 ranking.