Melbourne’s Park unique sporting heritage has been celebrated with Olympic Rings from the 1956 Melbourne Games installed on the Edwin Flack footbridge. 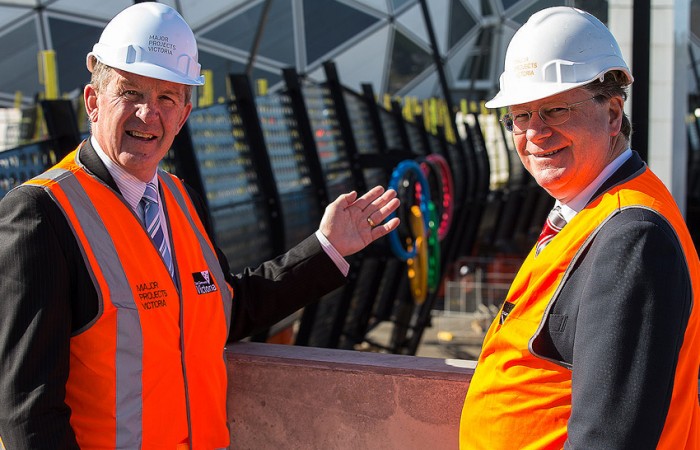 Melbourne’s Park unique sporting heritage has been celebrated with both sets of Olympic Rings from the 1956 Melbourne Games installed on the Edwin Flack footbridge overnight, Minister for Major Projects Denis Napthine announced today.

“These rings have a long history with Melbourne Park. One set was hung on the Olympic Park grandstand while the other was used on the grandstand for the Olympic velodrome on the site now occupied by AAMI Park,” Dr Napthine said.

“It is great to see them returned to their home and publicly displayed less than a hundred metres from their original positions.

“The Olympic Rings are a fantastic reminder of the precinct’s rich sporting heritage and I’m very glad we were able to include them as part of the new Edwin Flack footbridge.

“Named after Australia’s first Olympic champion, Edwin Flack the footbridge is another link to the past and a reminder of our nation’s sporting history.

“The bridge is a part of the $366 million first stage of the Melbourne Park redevelopment that is transforming Melbourne’s sporting and entertainment precinct.

“The new bridge will make it easier for everyone to get around the sports precinct and to travel between Melbourne Park, the MCG and AAMI Park. We expect it to open to the public in December this year in time for the Boxing Day tests and the Australian Open in January,” Dr Napthine said.

Minister for Sport Hugh Delahunty said work on the first stage of the Melbourne Park redevelopment was progressing well with elements such as the footbridge and Eastern Plaza opening to the public before the end of the year.

“Work on the National Tennis Centre training facility, offering 21 new indoor and outdoor courts, is ahead of schedule. New entrances have been created for Hisense Arena and over at Margaret Court Arena preparations are being made to transform the building site back into a tennis arena for Australian Open 2013,” Mr Delahunty said.

“Melbourne Park is already the envy of all other Grand Slams and this redevelopment will make the precinct event better.

“In addition, this year’s State Budget has also provided $5 million to plan for Stage Two of the project ensuring Melbourne Park sets the standard for Grand Slam venues for decades to come.

“The Victorian Coalition Government’s support for the Melbourne Park redevelopment demonstrates our strong commitment to tennis and the continuing improvement of our world class sports and entertainment facilities. It all adds up to a very exciting summer of tennis coming up in Melbourne,” Mr Delahunty said.