Serena Williams is ranked No.3 after dominating the field in 2012 and winning almost every title that matters, a farcical situation writes Matt Trollope. 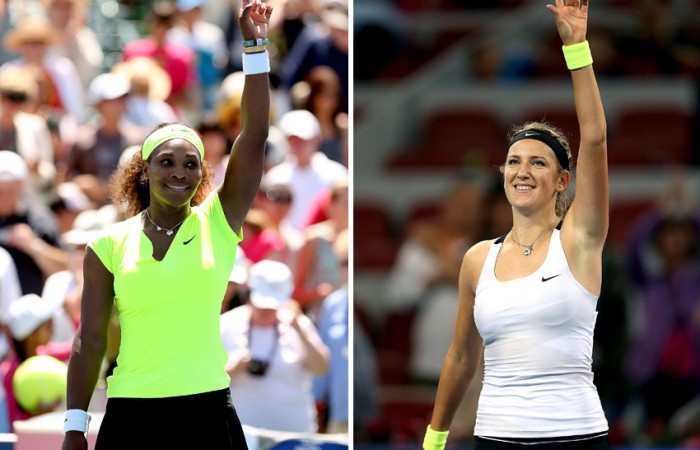 After a stunning year in which she dominated the field and won pretty much every title that matters, Serena Williams finds herself ranked world No.3. It’s a farcical situation, and one that should be remedied with some tweaks to the WTA ranking system, writes Matt Trollope.

Seven titles, the most of any player. The only player to win tournaments on all three surfaces. Winner of 48 of her last 50 matches. A stratospheric winning percentage of .935. These are just some of Serena Williams’s incredible stats during her banner 2012 season, and despite being the undisputed player of the year, the American legend finds herself ranked world No.3.

Apart from her stumbles at the Australian and French Opens, Serena won four of the six biggest titles of 2012 – Wimbledon, the Olympics, the US Open and the WTA Championships. So who could possibly be ranked ahead of her? Why, that would be Victoria Azarenka and Maria Sharapova, whom Serena went a combined 8-0 against this year.

You might accuse me of flogging a dead horse here, but until tour organisers do something criticism will continue.

At least the current official world No.1 garners more respect than those who have gone before her. Azarenka won a slam this season – and came within a service hold of a second – while claiming several other big titles and performing consistently on the game’s biggest stages. Plus she possesses the swagger, confidence and grit of a champion, qualities far less obvious in the women who held the mantle before her: Caroline Wozniacki, Dinara Safina and Jelena Jankovic. Yet it would be nice if the player everybody regards, without question, as the world’s best player was similarly recognised by the WTA Tour.

Sadly, Serena has found herself in this situation before. After winning Wimbledon in 2009 – her third Grand Slam title within the past 12 months – Williams continued to be ranked No.2 behind the slamless Safina. Asked how much of a motivation it was for her to regain the top spot, she said: “I’m not super motivated. I think if you hold three Grand Slam titles then maybe you should be No.1, but not on the WTA Tour obviously. My motivation is maybe just to win another Grand Slam and stay No.2, I guess.” Peals of laughter ensued in the press room.

And that’s exactly the problem. The WTA rankings, are, quite frankly, a bit of a laughing stock. Said Williams’s consultant coach Patrick Mouratoglou: “It’s surprising to win two Grand Slams, the Olympics, Madrid, and the WTA Championships and to be No.3. If there is a bug somewhere, someone has to find it.”

Well, that bug is the fact that the rankings don’t indicate who the world’s best player is – they instead show who’s most willing to turn up to lots of events and perform solidly and consistently. It’s quantity over quality, and it needs to change. Here’s how.

Why exactly are finalists at WTA events rewarded more handsomely than their male counterparts? It remains a mystery. Female runner-ups at Grand Slam events get 1400 points (and 700 at Premier Mandatory events), while male finalists get 1200 (and 600 at Masters events). It might go some way to explaining why Safina and Kim Clijsters were able to get to No.1 despite crumbling in several major finals, while Andy Murray never rose higher than second.

Nobody seriously considers a player world No.1 if they repeatedly fail on the grandest stage of all. And, arguably, the more Grand Slam finals they reach without ultimate success, the less respect they earn. The WTA should therefore reduce finalists’ points from 1400 to 1200, or even 1000. The difference between making a major final, and taking the next step to actually claim the title, is vast. It should therefore be reflected in how the points are awarded.

“If we still had the same ranking system we were using six years ago when they were giving bonus points for beating players, [Petra] Kvitova would have ended up No. 1 [in 2011] because she had beaten more top players than Wozniacki. Wozniacki doesn’t even have that great of a record in her career or the last four years over the top 10 or against the top five,” Martina Navratilova said during Australian Open 2012.

Quality points were something the women’s tour handed out until 2004, when the current system was adopted. Not only did players once earn points for reaching a certain stage of a tournament, but they were also awarded points depending on the ranking of the opponents they defeated en route. Knocking off the world No.1 earned a player an additional 100 points. Beating the world No.2 offered 75 points, downing No.3 was worth 66, No.4 earned 55, and No.5 was 50. So it went down the line, with quality points doubled at Grand Slam events.

On her path to the 2012 Wimbledon final, the average ranking of Serena’s opponents was 43, and two of her foes were ranked inside the top four. Meanwhile, fellow finalist Agnieszka Radwanska (ranked higher for much of the year) faced opposition with an average ranking of 79, and three of her first four matches were against players ranked outside the top 100. The “quality” of Serena’s Wimbledon campaign was arguably far superior. Players might not be able to control who they face on the other side of the net, but the WTA is not obligated to reward them equally.

Another gem of an idea that once existed as part of the WTA ranking system – but which was removed during the late 1990s – was that players simply had their points total divided by the total number of tournaments they played. Such a system certainly reduces the effectiveness of the Wozniacki strategy; that is, racking up countless tournament appearances and accumulating hundreds of points, which inflates a ranking.

If we take Serena’s 2012 points tally of 9400, and divide it by the number of events she played (15, including the mandatory Indian Wells and Beijing tournaments she did not contest), her average points total is 626.66. Azarenka’s average tally under this system would be 588.61 (10,595 divided by 18). Basically, this indicates that Serena performed better, on average, at tournaments throughout the season. Again it’s a measure of quality over quantity, and one that needs to be considered.

Some argue that the ranking system simply exists to determine seedings at events, and that it is not intended to be a measure of who the best player in the world is. But it should. Casual fans, logically, associate the term “world No.1” with “best in the world”. And when the two don’t add up, credibility is lost. So are the fans.

The WTA needs to take a good hard look at its system to prevent this unfortunate disconnect from persisting.