Sam Stosur has battled past Virginie Razzano in three sets to reach the quarterfinals in Osaka, while Casey Dellacqua fell in her second round match. 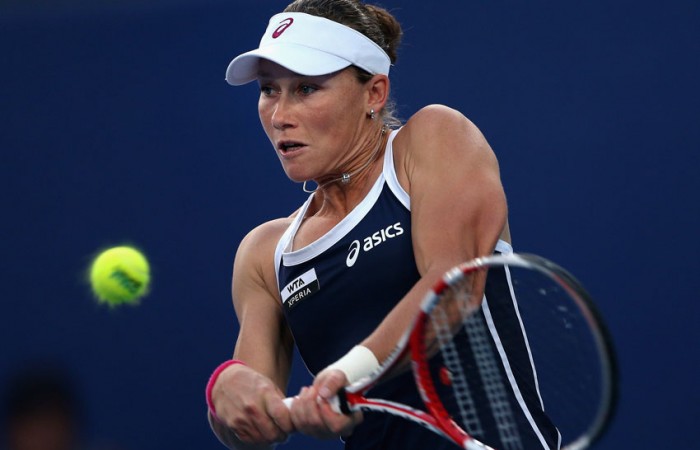 Sam Stosur has eeked out a three-set victory over Virginie Razzano to progress to the quarterfinals of the HP Japan Women’s Open in Osaka.

Yet compatriot Casey Dellacqua was not so fortunate, losing in straight sets in the second round of the $220,000 WTA International-level event to Kai-Chen Chang.

Stosur, the world No.9 and top seed in Osaka, recovered from a disastrous opening set before eventually recording a 1-6 6-2 6-4 win in just under two hours.

Razzano is an experienced player and dangerous foe, most famous for her sensational upset of Serena Williams in the first round of this year’s French Open.

And she looked set to build on that reputation after the opening set, expertly reading the Aussie’s powerful first serve and contributing to Stosur’s below-par first serve winning percentage of just 26.

Stosur shrugged off that disappointment by breaking in the fourth game of the second. Another break helped her build a lead of 5-1 before she soon went on to level the match at a set apiece.

The third set was a battle, but Stosur’s greater big-match experience prevailed.

One service break midway through the final stanza was all she needed – although unable to convert a match point when receiving at 3-5, she returned to serve out the match in the next game to book her place in the last eight.

Meanwhile, Dellacqua fought hard but couldn’t match the form of her Taiwanese opponent, going down 7-6(4) 6-3.

Chang had in the first round defeated third seed Christina McHale, and took confidence from that victory into the tight opening set, which progressed to a breaker after each player broke serve four times.

Despite her serving woes – she finished the match with six double faults – Chang was able to hold on to clinch a one-set advantage.

She broke early in the second, and built a lead that the Australian could not reel in. A second break cemented victory for Chang after one hour and 36 minutes.