UPDATE: Sam Stosur and Casey Dellacqua have both come through their opening matches at the Japan Open in Osaka, albeit in very different circumstances. 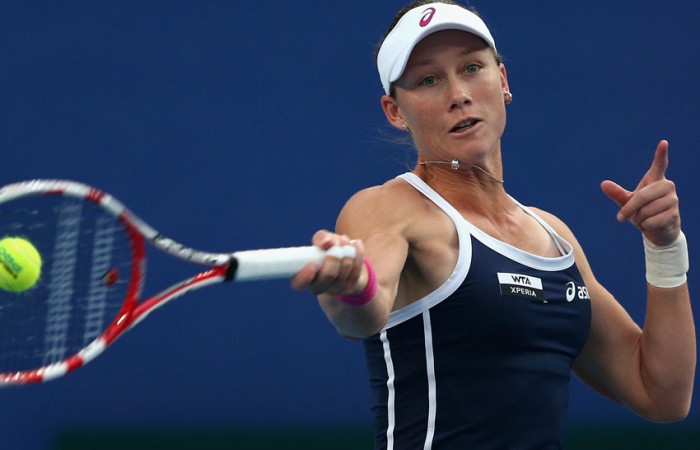 Sam Stosur has passed her opening round assignment in Osaka with flying colours, dismissing the threat of local Erika Sema in straight sets.

Yet is was harder work for her compatriot Casey Dellacqua, who battled for three sets before subduing Japanese veteran Kimiko Date-Krumm.

Stosur defeated the Japanese world No.164 6-4 6-2 to set up a second round match against either Virginie Razzano of France or a qualifier.

The Aussie had difficulty shaking off Sema in the early stages of the match, with games level until Stosur was able to score a decisive break, an advantage which saw her go on to snatch the opening set.

Although she continued to struggle on serve – five aces were tempered by seven double faults – it was one way traffic once she pocketed the opening set. The world No.9 wrapped up the win in one hour and 16 minutes.

Stosur is the top seed at this event, a tournament she won in 2009 to give her her maiden WTA title.

Meanwhile, Dellacqua is unseeded, and won the battle of the non-seeds against 42-year-old Date-Krumm, ranked 103rd.

Dellacqua took the first set but struggled to take her chances in the second, converting just one of seven break point opportunities and allowing the former world No.4 to level the match.

In the final set, the Western Australian broke serve early and maintained her advantage, eventually running out a 6-3 3-6 6-4 victor in two hours and 13 minutes.

Dellacqua next meets Kai-Chen Chang of Taiwan, who upset No.3 seed Christina McHale in straight sets.