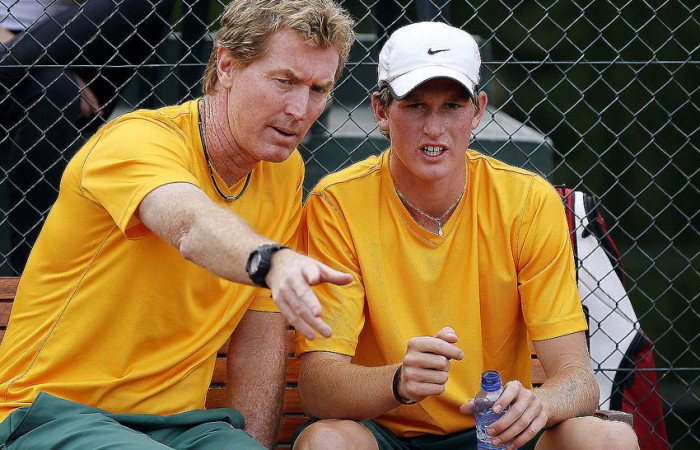 The boys ended up beating the No.1 seeds United States in the semis and now face second seeds Italy in the final on Sunday.

Harry B began slowly in his match today against Kozlov, losing the 1st set 1-6. Gradually he worked his way back in the 2nd set and was able to apply some pressure on the younger American. Midway through this set, Harry ignited from the backcourt and levelled the match.

After three straight service breaks, fatigue set in and Harry was down 2-5 with Kozlov serving at 40-love. His opponent missed a few shots and allowed Harry to break. The next game Harry was down 15-40 on serve and a further two match points after that, but was determined to force the American to win the match without making errors. He held serve and it was noticeable how nervous Kozlov had become with Harry starting to strike winners and punish anything short.

Harry managed another break to level at 5-5 and from then on it was one way traffic – he snatched this match away and took it 7-5 in the third set. Then the rain came thundering down and play was suspended for two hours.

Thanasi K came out against Noah Rubin who had also not dropped a singles match all week. From the opening game, Thansis made his intentions known and was able to quickly clear out to a 5-1 lead. A lapse in concentration handed back one break of serve but Thanasi showed tremendous nerve to hold the next time he served for the set, taking it 6-3. In the second set, the boys exchanged breaks to start it out before Thanasi’s broader depth of game started to cause problems for the American again. He zipped through the final four games, taking it 6-3.

The doubles rubber was not required to be played.

So we have a day off and the weather is supposed to be poor tomorrow which makes it sweeter – the fellas can rest up. All three are ecstatic to be in the final … and tired. Each day, whether Blake or Harry were starting first match, they gave us a lead and helped Thanasis to come out and not feel too much pressure having to play catch up. Thanasi has shown he is clearly up there with the best players of his age who are competing here on clay.

All thee recognise there is one match to go against a classy Italian team and are looking forward to the challenge.

Meanwhile, the Aussie girls fell in their semifinal match to Russia, going down 2-0.

Zoe Hives put up a strong fight in the second set before bowing out to Daria Kasatkina 6-2 7-5. Russia then sealed their place in the final against the United States when Elizaveta Kulichkova beat Isabelle Wallace 61 63.

Like the boys’ match, the doubles rubber was not played.