Davis Cup captain Pat Rafter knows it is coming but he does not have to like it. 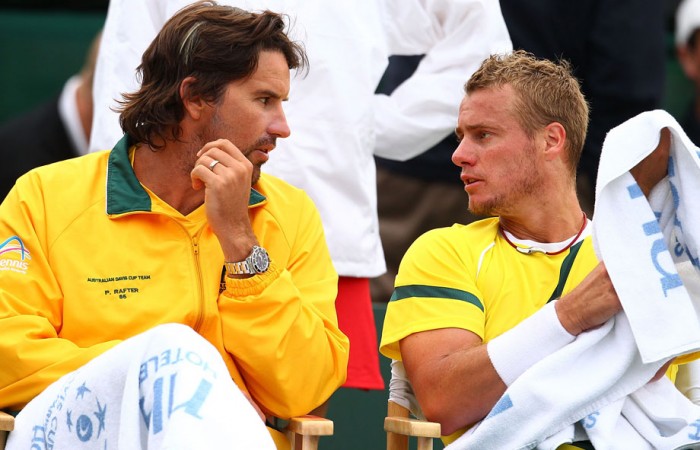 Davis Cup captain Pat Rafter knows it is coming but he does not have to like it.

When questioned on the eve of the tie against Germany in Hamburg (Friday 1930AEST, check the TV Guide) about the national team’s future post-Hewitt, Rafter replied: “He better be here in four years time, Lleyton”.

Rafter was half smiling and turned to Hewitt who was sitting next to him at the press conference.

Australia’s greatest Davis Cup servant accepts he is on borrowed time but Rafter understandably wants to drain every last drop out of his old teammate.

It is not only his fighting spirit on court but the example the South Australian sets off it.

Sure, Hewitt has rubbed up people the wrong way during his career but his commitment to the national cause has always been exceptional.

Especially, compared to many of his peers.

The in-fighting within the German team is a good example of the strains of trying to pull professional players into line with national needs.

World No.18 Philipp Kohlschreiber (omitted) and No.21 Tommy Haas (unavailable) are both not playing in Hamburg after butting heads with officials.

These are not problems that Rafter has at the moment.

With Hewitt around, who’d dare take their Davis Cup spot for granted?

But Australia desperately need to build up depth in time for Hewitt’s departure.

Bernard Tomic has the potential to be Australia’s long-term No.1 while it is hoped that 24-year-old Matt Ebden continues his progression from a career-high ranking of 64.

At 27 and without a win at grand slam level, Marinko Matosevic has it all to prove.

In a bid to fast track the next generation, the Australian brains trust handed 20-year-old James Duckworth a taste of life in the national camp this week.

The young Sydneysider, who has shown a liking for clay, brought all of his youthful enthusiasm to every training session.

“He is a guy that we are looking at in the future to add to the depth of the Australian team,” Rafter said.

“We will keep a close eye on him.”

If Duckworth didn’t find enough inspiration mixing with his childhood heroes Rafter and Hewitt, all he needed to do was walk around Rothenbaum Stadium.

A picture of his grandmother Beryl Penrose, the 1955 Australian Open champion, is on the walls of champions at the venue.

Duckworth’s ranking has slipped to 210 but few players of his age break into the top 100 these days due to the physical nature of the modern game.

“That is sport, you keep looking for the next crop of players coming through and help develop them.”