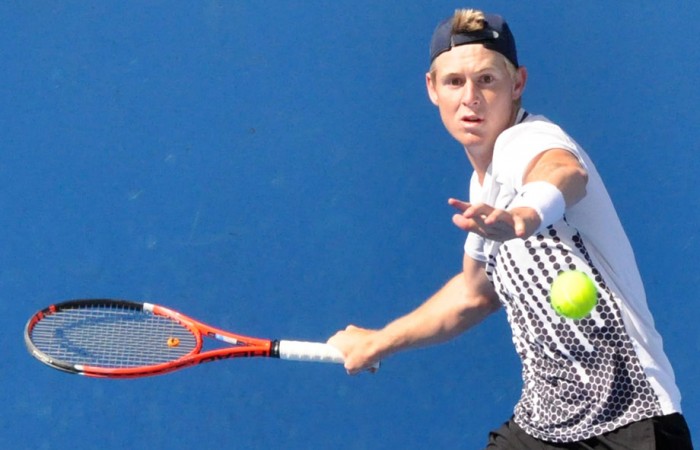 Junior Grand Slam champion and Riverland local Luke Saville (Barmera, SA) will lead a world-class field at the men’s tournament to be held at Happy Valley Tennis Club from 9-16 September 2012.

Eighteen-year-old Saville will be looking to win at home having opted out of the US Open Juniors in New York this week.

Joining Saville will be Michael Look (Scarborough, Qld), whom he defeated last Sunday to win the Cairns title. Look will also be wanting to stamp his mark on Happy Valley having won the tournament last year over Adelaide’s Colin Ebelthite.

Former World No.220 Sam Groth (Templestowe, Vic), James Lemke (Camberwell, Vic) and Saville’s AIS Pro Tour colleague Alex Bolt (Murray Bridge, SA) are just some of the others who will compete for $USD15,000 in prize money.

Joining the Australians will be international players from Japan, New Zealand, Israel and USA.

Tournament Director of the City of Onkaparinga Tennis International, Ryan Peremiczko, believes the event is a great opportunity for national talent to gain valuable match experience against international players as they climb the world’s rankings.

“To have players come from abroad to Happy Valley and play alongside our national talent is fantastic for the tournament and the Australian Pro Tour,” Peremiczko said.

Peremiczko also praised the City of Onkaparinga Council for their ongoing support and encouraged the community to get behind the future of Australian tennis at the event.

“Following last year’s success, we hope the local community can once again head down to watch our country’s up and coming tennis stars take their next step onto the global tennis stage at this free community event.”

Up north, the new USD$10,000 women’s tournament, City of Salisbury Tennis International, is set to take place for the first time at the Salisbury Recreation Precinct, 9-16 September 2012.

Western Australia’s Bojana Bobusic (Perth, WA) will be the top ranked Australian, as she aims to defend the title she won last year at the Mount Gambier tournament.

South Africa’s Chanel Simmonds will lead the international field. The 20-year-old, who holds nine ITF Pro Circuit titles, will travel to the City of Salisbury as will a host of others including Slovakia’s Zuzana Zlochova and Japan’s Chiaki Okadaue and Mai Minokoshi.

“The City of Salisbury has really embraced the opportunity to host an international tennis event, and we’re looking forward to delivering a great tournament in conjunction with the Salisbury Recreation Precinct,” Allen added.

The Mayor of Salisbury is thrilled to host the international sporting event and looks forward to welcoming the players to the city.

“We are excited that we have the opportunity to host the inaugural City of Salisbury International Tennis Tournament,” said Gillian Aldridge, Mayor of Salisbury.

“We look forward to welcoming all the players and officials to our city, and know they’ll have a fantastic experience. It shows, once again, the city’s capacity for hosting top sporting events and the Salisbury Recreation Precinct is one of our best assets.”

Following these events the Australian tour will move to Port Pirie for the Nyrstar Port Pirie Tennis International (15-23 September 2012).