After stretching Li Na in their second round match, Dellacqua believes she has the game to match it with, and perhaps beat, the top players in women's tennis. 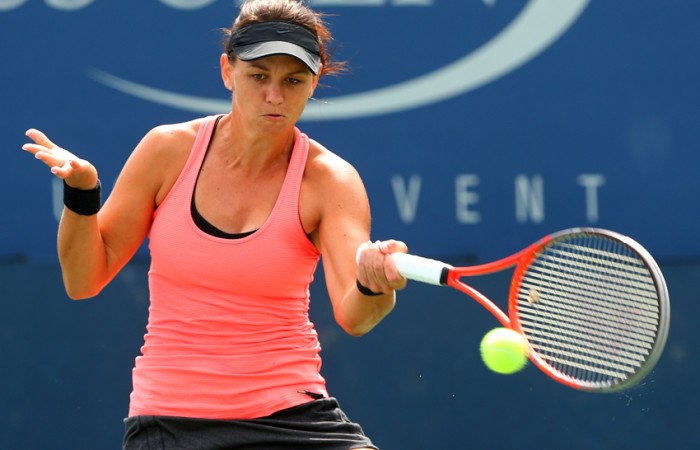 On Grandstand court at Flushing Meadows on Wednesday, the packed crowd – predominantly there to watch the Williams sisters in doubles in a later match – got the chance to see one of the US Open’s biggest favourites, Li Na. Most imagined it would be a simple day at the office for the in-form Chinese, one of the best-performed players in North American hardcourt swing leading up to the US Open.

Except it didn’t quite pan out that way. Casey Dellacqua, ranked No.92 and a considered a long-shot to buck the form guide, very nearly did when she raced to a 4-1 lead in the second set. Although Li eventually found her groove to reel off five straight games, the Aussie had no doubt given her a scare throughout the tight 6-4 6-4 win.

Dellacqua said she was would take plenty of positives out the match.

“She’s probably playing the best she’s played in a long time. I was able to match it with her … and I’ll be able to take a lot from it,” she said.

“From where I’ve come from, I’m really pleased with where I’m at. There’s a lot of things I still want to improve on, but to know I can match it with someone like Li Na, it’s a step forward for me, and I’m really happy with the way I’ve been going and how I’ve played here in America.

“I want to continue that for the rest of the year, finish as high as I can and keep progressing, and hopefully be able to beat those (highly-ranked) girls in the next six months or a year.”

Dellacqua was once one of those players in the upper reaches of the women’s game herself, cracking the top 40 in 2008 thanks to an excellent season highlighted by a fourth round finish at that year’s Australian Open, her best performance at a Grand Slam to date.

Since her injuries, the Australian has spent much of her time competing on the ITF circuit – a rung down from Grand Slams and WTA-level events – while the game has progressed, with more girls from more countries improving the standard of the tour and making it harder to return to her former heights.

The increased depth in women’s tennis is something that Dellacqua has noticed since trying to re-establish herself, four years later, in the higher tiers of the rankings.

“When I was back playing (before my injuries) you had Venus, Serena, Henin and Clijsters, and they pretty much were always winning. Even in the first round of slams, they cruised through. These days, even at qualifying at lower-level events, you don’t get any easy matches. Anyone in the top 100 on any given day can match it with or beat girls in the top 20 or top 10,” she observed.

“I’ve found it very difficult (coming back). I’ve obviously done well at the lower level but it’s tough, and even at 100 in the world where I’ve been most of the year, I haven’t been (able to get) in the main draw of many WTA events at all, even the 280s (the lower International-level WTA events).

“It’s not easy to get your ranking up, so once you do, you’ve got to cement yourself in there.”

Although it’s been a challenge, Dellacqua feels like she’s getting closer to doing just that.

Against Li, Dellacqua believed that there was just a few points here and there that proved the difference between a straight-set win for the Chinese, or a match that extended into a gripping third stanza.

The Western Australian said she that while she was able to target weaker spots in the world No.8’s game to elicit errors, Li was able to land some big serves at the crucial moments in the second set which, ultimately, proved decisive.

“(Coming back) I always wanted to get to top 100, and at the moment I’m No.92 in the world – probably in my head that’s where I’m at, but maybe I’m a bit further along … I certainly feel like I have the game to beat those (top) girls, but there’s a lot of other areas I need to work on to do that,” she said.

“I’m just trying to be realistic. Before I got injured I got to No.39 in the world, but I feel like a completely different player, and probably a better and more wise player. Who knows where my ranking will take me?”

Wherever her she does eventually end up down the track, Dellacqua believes the future is definitely looking brighter after years of injury and toiling away on the ITF circuit.

“I think I’ve progressed from there, and definitely I feel like I’m past that. Now I’ve just got to keep moving forward.”