US Open: Dellacqua, Rodionova knocked out

Casey Dellacqua pushed Li Na before falling in the second round of the US Open in two tight sets. Anastasia Rodionova was also eliminated. 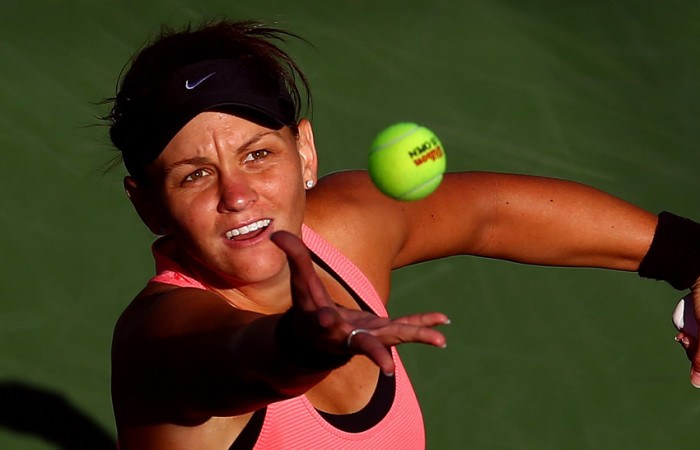 Casey Dellacqua has given Li Na a scare before falling in two tight sets in the second round of the US Open.

The Australian led broke serve to lead 4-1 in the second set, before the in-form No.9 seed came roaring back to snatch a 6-4 6-4 victory.

Earlier in the day, Anastasia Rodionova’s 2012 US Open campaign has come to an end, with the Victorian falling 6-2 6-2 to No.31 seed Varvara Lepchenko.

Dellacqua was unlucky to come up against Li, the winner of the recent Cincinnati Premier event and who has made the Montreal final the week before.

But she fought hard and forced the Chinese player to work for points – it took a scintillating running forehand winner down the line for Li to gain the first service break of the match.

Li held onto this advantage for the rest of the set, but once the second began, it was Dellacqua in the drivers’ seat.

She broke serve in the second game and consolidated for a 3-0 lead, and looked set to level the match when she moved ahead 4-1.

Li regained control, however, her powerful groundstrokes finding their mark and helping her reel off five straight games to take the match in one hour and 27 minutes.

The ninth seed’s win sets up an intriguing third round clash with either three-time US Open winner Kim Clijsters or emerging British talent Laura Robson.

Rodionova was undone by a swollen error count, finishing the match with 26 to just four winners.

Lepchenko moves into a third round battle with either No.7 seed Sam Stosur or Edina Gallovits-Hall of Romania.

It was match on Court 17 between two players representing new countries – Uzbekistani-born Lepchenko now competes for the United States, while Rodionova, orginally from Russia, became an Australian citizen in 2009.

The American fed off the home support early in the match, racing to a 4-0 lead under sunny skies at Flushing Meadows.

Rodionova began to settle into the contest, breaking back and beginning to display the form that saw her win her previous four matches (beginning in qualifying) in straight sets on her path into the second round in New York.

It was a similar story in the second – Lepchenko maintained pressure on Rodionova on every point, playing consistently deep and stepping up to rip a winner when she got the right ball.

Rodionova simply couldn’t get into the contest, and went down after one hour and nine minutes on court.