With a grooved backhand anchoring his attack, Bernard Tomic is beginning to rediscover the form that took him to the world’s top 30 earlier this season. 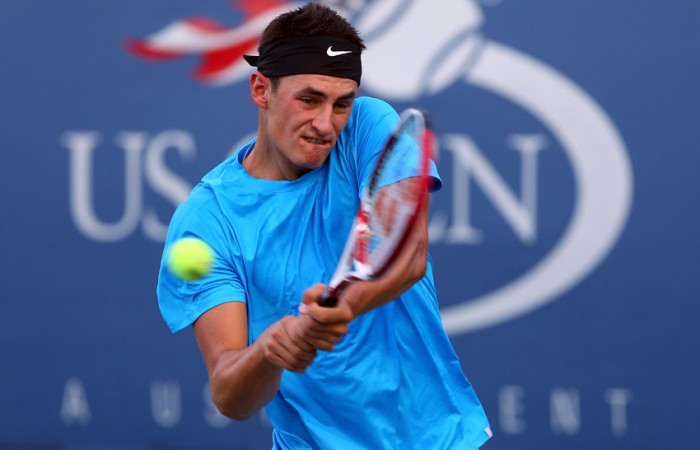 It wasn’t looking like a great night for Bernard Tomic out on Court 13 on Tuesday at the US Open. In oppressively humid and heavy conditions as dusk settled over New York City, the Aussie men’s No.1 looked lethargic, going down 4-0 to Carlos Berlocq before dropping the opening set not long after that.

Yet when the second set began, he was transformed.

“I tried going more aggressive with my backhand. All of a sudden my backhand came out of nowhere and (was) going down the line,” he said.

“I was really happy with my backhand. I’ve never seen it like this. So confident the way I was hitting it. I just couldn’t believe I was stroking it like that. (It’s) good to see the training has been coming (along) well the last week. That shot is paying off, doing a lot of damage.”

A firing backhand seemed to elevate the level of other parts of his game. The 19-year-old flattened out his forehand to rip several clean winners – among a final total of 59 winners – while smacking seven aces and advancing to the net 36 times.

It all contributed to help Tomic to come out on top of a physical encounter by the scoreline of 4-6 7-5 6-3 6-4, setting up a blockbuster second round clash with Andy Roddick.

The match-up has the makings of an Arthur Ashe-scheduled slot, pitting one of the game’s most impressive rising talents against the popular local hero, a winner of the US Open back in 2003.

“I think it’s going to be very big for me,” Tomic said.

“It’s going to be very difficult. He’s got the crowd here. It’s like me playing in Australia – you feel very good. The crowd gets behind your back. I think the crowd’s going to be on his side.

“I think I can play well and relax. I think if I play the way I was playing today, I can pull off the upset.”

Roddick wouldn’t argue with that. The American, seeded No.20 at this year’s Open, has battled through a less-than-ideal 2012, two minor titles being the highlights of a season that’s seen him go a modest 20-15 and fall early at the year’s first three majors. Injury has also increasingly hampered the former world No.1, who turns 30 on Thursday.

Roddick said he was wary of the danger Tomic presented coming into the match.

“He’s very talented. He’s played well. I think now he’s dealing with playing well on a consistent basis. I think that’s the next step for him. Hopefully we can delay the process a week,” he said.

It’s been an encouraging return to form for Tomic, who endured a run of seven consecutive defeats from late May until early August, where he broke the ice with a win at the Canada Masters event.

Tomic has been reinvigorated by the move to North American hardcourts, following up a second round finish in Toronto with an appearance in the third round in Cincinnati, straight-setting promising Americans Ryan Harrison and Brian Baker before falling to top-ranked Roger Federer.

A training stint in the steamy climes of Florida has now been followed up by a second round berth in New York, and it seems Tomic is beginning to rediscover the form that saw him hit the world’s top 30 prior to Roland Garros.

“It was very difficult,” Tomic said of his lean period on European clay and grass.

“(But) I was training well and competing. I think I played a good Olympics – I lost a very tight match (to world No.17 Kei Nishikori). I felt like I was going to get that win sooner or later. I mean, if you work hard, you’re doing the right things, you’re going to get it eventually.

“Now I’m feeling pretty good and back to the form I was playing at the start of the year.”

Yet he has accumulated a wealth of experience on big courts, including several appearances on the Australian Open’s Rod Laver Arena at the beginning of his still-young career. The Queenslander believes that the grandest occasions and stages bring out his best tennis.

One thing’s for sure – Tomic is not short on confidence.

“It’s a matter of getting that break, holding on, believing in yourself. I don’t think he’s like the top three or four (in the world). That’s definitely where I have a lot of belief. I believe I can win this match,” he said.

“In practice I think I hit my backhand is probably in the top four or five in the world when I want to … I’m going to stick to this game plan, hitting my backhand like that.”