US Open: Tomic recovers to win in four

Bernard Tomic has shrugged off a slow start to defeat Argentine Carlos Berlocq in four sets at the US Open. 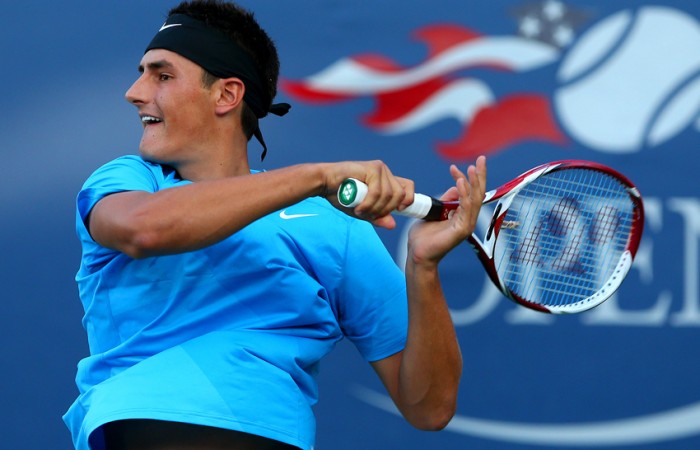 Bernard Tomic has overcome stifling heat, a pesky opponent and a lacklustre start to book a second-round US Open date with former champion Andy Roddick.

An off-colour Tomic required assistance from ATP trainers to perk him up during a sapping 4-6 7-5 6-3 6-4 victory over claycourt specialist Carlos Berlocq.

The win over the world No.43 set up a first-time meeting with Roddick on Thursday after the American earlier advanced with a 6-3 6-4 6-4 success over young countryman Rhyne Williams.

Contesting his third US Open after winning the junior championship in 2009, Tomic has yet to venture beyond the second round of the men’s event.

“It’s going to be very big for me,” Tomic said of facing Roddick.

Playing consistently was an issue for Tomic on Tuesday alone as he was forced to battle back after a sluggish start, which saw him drop his first two service games of the match to quickly fall behind 4-0.

He upped the tempo to get on the board in the fifth game, then broke Berlocq to get into the contest before calling for the trainer while trailing 4-3.

He popped a pill but it didn’t kick in quick enough to help him recover the first set as Berlocq closed it out after 34 minutes with an ace.

His class showed, though, as he rifled a forehand winner to break the Argentine in the second game of the second set. Despite not being able to completely eradicate sloppy errors, he fired up to break Berlocq with a series of forceful groundstrokes in the 11th game and claimed the second set when the South American coughed up his second double-fault.

“I was really happy with my backhand. I’ve never seen it like this. So confident the way I was hitting it. I just couldn’t believe I was stroking it like that,” Tomic reflected.

“It’s good to see the training has been coming well the last week. That shot is paying off, doing a lot of damage.”

Re-energised, Tomic fought hard to break Berlocq again in a marathon second game of the third set, the laconic youngster expressing his satisfaction with a big fist pump after wrong-footing his opponent with another booming forehand.

Tomic fended off a break point with a backhand winner to hold for 3-0 and then couldn’t believe his luck when Berlocq swatted a sitter of a volley into the net to gift the Australian a double break.

He took the set after dead on two hours and carried his momentum into the fourth, breaking Berlocq twice more to clinch victory on his second match point. He joins doubles partner and Davis Cup teammate Matthew Ebden in the second round.