After putting in the hard yards on and off court following her return to tennis from injury 18 months ago, Casey Dellacqua is beginning to see the results. 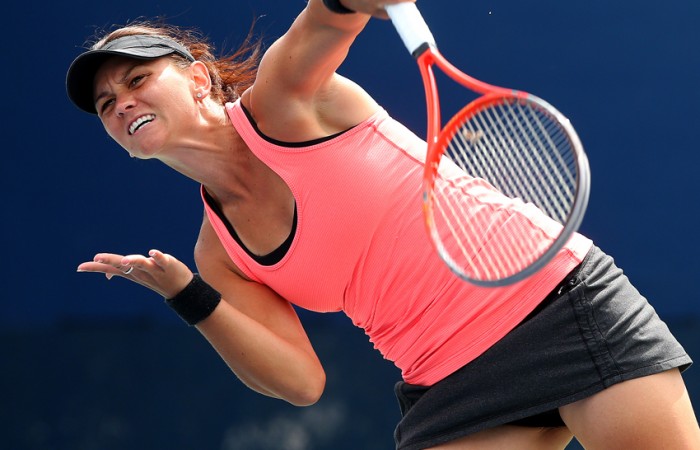 Almost two full years out of the game is a lot for a player to endure. There’s the frustration at a promising career and aspirations put on hold, the inconvenience of countless hours in rehabilitation and time away off the court, and the concern that the same level of play may not be reached upon returning.

Yet that’s exactly what Casey Dellacqua experienced throughout 2009 and 2010, the bubbly Western Australian suffering serious shoulder and foot injuries that necessitated surgery and almost completely limited her on-court activity during that time.

It’s what makes her recent run of good form in the United States all the more sweet. Dellacqua won through to the second round of the US Open for just the second time in her career after dismissing Ukrainian qualifier Lesia Tsurenko on Monday.

The result came hot on the heels of reaching her first ever WTA-level semifinal, with the Western Australian upsetting a string of higher-ranked foes – as a qualifier, no less – on her path through to the final four at the Texas Tennis Open in Dallas.

“To be honest, I’m just happy to get through that first round (in New York). I’m happy that my body’s healthy, and happy that I’m finally getting a few rewards for all the hard work I’ve put in,” she said.

“It’s been 18 months since I’ve come back and it was never a short-term thing. I didn’t feel like it was going to happen straight away that I would start winning matches at a higher level, so I guess it’s just been a bit of a process. I’ve been playing good tennis all year … but still was working so hard, and I was thinking I’ve just got to get out there and keep doing it.

“Finally I had a bit of a breakthrough week last week and yeah, I’m feeling good.”

When Dellacqua returned to tennis in March 2011, it was very much a matter of starting from scratch. Having been off her feet for the good part of a year following her right foot operation, improving her fitness level was a priority. And through her partnership with new coach Chris Johnson, she tinkered with the technical side of her game, which included making some changes to her serve.

Despite having fully recovered from her foot injury, there are still precautions to take. Returning to hardcourts after months playing on clay and grass was tough on her body, meaning that she limited running outside of her practice and matches to limit the stress on her feet, and used her time in the gym more efficiently.

Experience certainly helps in such situations. Older and wiser since her return to tennis, Dellacqua said that a good knowledge of her body means she knows her limits, helping her work out when it’s safe to push her body hard, and when she should ease off to prevent fatigue or re-injury.

It’s an approach that’s helped her achieve her goals since coming back.

“My first goal was obviously to get to 100 (in the rankings) and get as many wins as I could, and it’s kind of finally coming together a little bit, so hopefully I can keep it going,” she said.

Hitting this mark has allowed the 27-year-old to re-evaluate her schedule for the remainder of the year, a hugely positive development.

“I’ll probably go home after (the US Open) now. I was planning on staying on and grinding the rest of the year out, but I’ve put the hard work in, had some results … (so) now I can kind of relax for the rest of the year, knowing I’ll be main draw at the Australian Open off my own ranking,” she said.

“I don’t have to worry about the (AO wildcard) play-offs, finally, and I can just have a proper pre-season, train hard and focus on next year. I think I’ve got to reassess my goals a little bit, set some new challenges.”

The first challenge ahead of her, however, is a second-round date with No.9 seed Li Na at Flushing Meadows.

The Chinese player is in magnificent form, having reached the final of the recent Montreal Premier event before winning in Cincinnati the next week, her first title since becoming champion at Roland Garros in 2011.

“Li Na will be a huge challenge,” she admitted.

“I’m playing girls ranked in the top 100, but top 10 is a different calibre of girls. But I’m playing really well – I’ll just fight for every point, and we’ll see what happens. I’ll certainly enjoy it.”