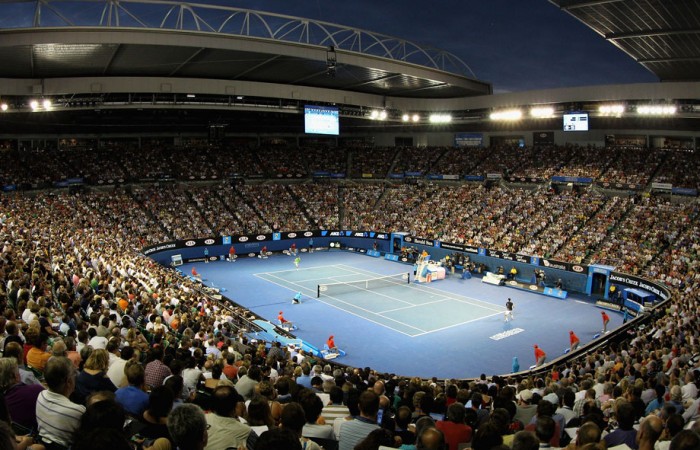 Money conversations are almost always awkward but in the current tennis landscape, they’ve also  become alarming, with fans shocked by reports that male players are threatening to boycott the upcoming Australian Open in a bid to secure greater prize money.

It seems an extreme reaction when you consider the multi-million dollar pay cheques delivered to Grand Slam champions like Novak Djokovic, who earned a record AUD$2.3 million for his Australian Open 2012 victory. However, the rumblings of discontent are, in fact, not about those champions but about the players who exit in tournaments’ early rounds.  When you factor in taxes and the costs of travel, accommodation, coaching, medical bills and the like, many players say they’re simply not breaking even, let alone contributing to their retirement funds.

Andy Roddick explains that while life as a top player is generally a comfortable one, it can be a contrastingly harsh existence for the many athletes working hard to break through at a higher level. “I think we all feel very fortunate for what we get, but we are putting people on seats,” he said.

“The guys ranked 80 to 90 to 1000 in the world aren’t making the big bucks right now, and they’re paying their own expenses, which you don’t do on a professional sports team.

“That is who any action would benefit.”

Players themselves are not the only ones battling with the complex business of tennis. Long before the threat of a boycott to the upcoming Australian Open became public, player compensation was the subject of serious closed-door discussions at the game’s highest level.

Having sat through meeting after meeting as they work to find a workable solution that delivers the best possible outcomes for players and the public that supports them so loyally, administrators not only take the player threats seriously but are also sympathetic to their concerns.  “We’ve been very supportive of [player] views,” stresses Australian Open tournament director Craig Tiley.

At the same time, there’s also a clear requirement to direct energies where they are most required. Potentially lost in the sensational suggestion that the Australian Open may become a victim of player discontent is the fact that this is not an issue about the Australian Open itself, but about the sport in general.

“One piece that’s really been missing in the entire conversation is that over the past four years, the Australian Open has been the richest event in the world,” Tiley notes. “We’ve paid more prize money than any other event annually.”

Indeed, while the AUD$20,800 players received to contest that one match at this year’s Australian Open would more than meet the expenses they incurred to compete, it’s a different story at lower level events. While Grand Slams and ATP Tour level tournaments have actually bolstered prize money pools in the past 30 years, earning opportunities at Challenger and Futures events have not just remained stagnant in that same period, but in some cases decreased.

It’s clear that remedying that disparity is an issue for all of tennis and equally certain that a failure to do so could be detrimental to the game’s long-term development.

“If the lower ranked players are not making sufficient money, then the parents of the athletes are going to go into other sports,” says Tiley who, alongside his role as Australian Open tournament director, is also Tennis Australia’s Director of Tennis. “We need to make tennis attractive for them.”

That’s a more complex undertaking than simply delivering a greater proportion of the revenue generated by the Australian Open, or any of the Grand Slams, to players – especially when you consider the investments those events make growing other areas of the game, including the construction and maintenance of courts and facilities, promotion and growth of participation and the development of the next generation of champions.

The Grand Slam Development Fund, which was launched in 1986 and has so far generated more than USD$75 million to facilitate competitive opportunities for players from developing nations, is another pertinent example of a collective focus on the long-term health of tennis.

Australian Open 2012 champion Victoria Azarenka, as well as popular former finalists Li Na and Marcos Baghdatis, are among those who have benefited from the fund, which is boosted by annual contributions from all four Grand Slams.

There’s an irony of sorts in the fact that Roger Federer, as President of the ATP Player Council, is among the leading voices in the player compensation debate. Having earned USD$73.4 million in prize money and a similarly staggering sum for a range of endorsements, there’s no doubt that the prolific champion is playing for records and not income now.

If it’s admirable that Federer and other top players would consider sacrificing their records to support less-credentialed tour mates, surely it’s more sensible to also consider a more even distribution of the overall prize money pools?

It’s a suggestion that seems as extreme – and unlikely to eventuate – as the threat of a player boycott, which simply highlights the fact that amid all the passionate debate are solutions that could not only suit everybody, but could ultimately lead to a stronger sport.

In the meantime, fans need not worry about their Australian Open experience. Rumours that the ATP Tour was considering hosting an alternative event in Dubai next January have already been dismissed and Tennis Australia is working hard to ensure another high quality instalment of the season’s opening Grand Slam.

“I think it’s highly unlikely that there will be a boycott of the Australian Open,” said past Australian player Todd Woodbridge. “I would be very shocked if that were to happen. I think we’re in very good shape.”