Forty-six-year-old Janel Manns will fly the flag for Australia at the London 2012 Paralympic Games in women’s wheelchair singles and doubles events. 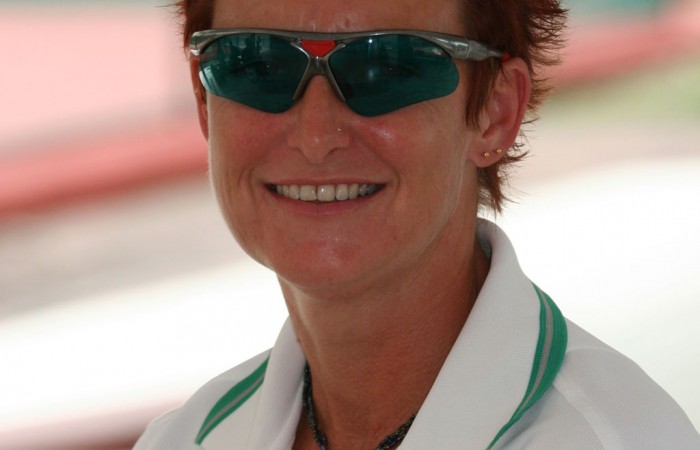 Forty-six-year-old grandmother, Janel Manns (Port Macquarie, NSW), will be flying the flag for Australia at the London 2012 Paralympic Games in the women’s singles and doubles wheelchair tennis competition.

“It’s time for me to step up and realise my full potential … I have exceeded all my set goals, I never really believed that this Paralympic dream would be achieved,” said Manns, who became an incomplete paraplegic when she fell over while running on a wet bathroom floor at the age of 32.

The London 2012 Paralympics, to be staged from 29 August to 9 September, will be Manns’ first Paralympic appearance.

“I have a deep respect for Daniela Di Toro,” Manns said of her doubles partner. “This will be Dani’s fifth Paralympics and I admire the training and commitment that she has given to aspire to achieve five Paralympic selections … Dani really encourages and supports newcomers like me.”

Manns, who works as a TAFE teacher and trains under Philip Robinson at the Kendall Tennis Club near Port Macquarie, believes the competition for a podium finish will be red hot.

“The toughest competitors are the Dutch women, four of whom are ranked in the top eight in the world,” Janel said. “Esther Vergeer has a 465-match winning streak and has not been defeated since 2003.”

Manns has enjoyed a great lead-up to the 2012 Games, reaching the doubles final with Di Toro at the Salzburg Open, an ITF 1 Series tournament in early August, before going down to the German outfit of Sabine Ellerbrock and Katharina Kruger. At the 25th Austrian Open, a tournament held just prior to the Paralympics, Manns partnered Korean player Ju-Yeon Park to gain a finals berth.

The road to London began six-and-a-half years ago for Manns after she was introduced to the sport soon after retiring from competitive basketball.

Winning bronze at the 2006 FESPIC Games, triple gold at the 2007 Arafura Games and hitting No.17 in the world in 2010 have been her career highlights to date.

Australian wheelchair tennis coach Greg Crump quickly spotted Manns’ potential in 2006, encouraging her to continue with the sport. Six years on, she is now ranked No.40 in the world and is about to serve up a big Paralympics campaign.

“Janel is a talented player and should make the most of her first Paralympic experience,” Crump said. “She has had a great prelude to the 2012 Games and has definitely earned her spot.”

“Australia hasn’t won a gold medal in tennis since David Hall in Sydney and we would really love to see another gold won by an Australian,” said Australian Paralympic Committee CEO and 2012 Team Chef de Mission, Jason Hellwig.