US Open: Aussies in qualifying action

UPDATE: Six Australians will contest this week’s US Open qualifying draws, hoping to win a prized berth in the main draw of the year’s final Grand Slam event. 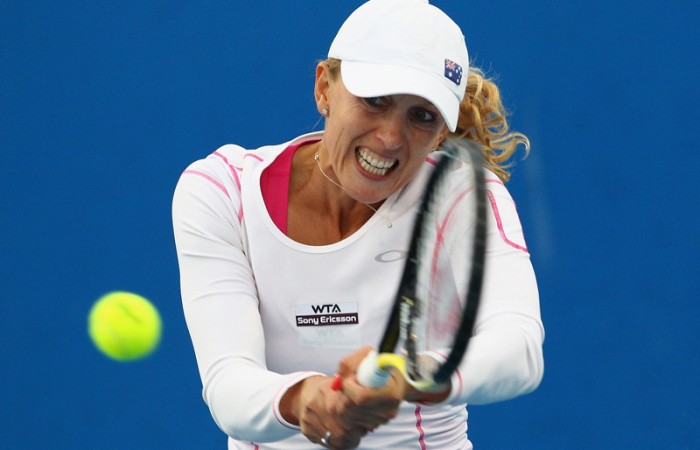 Seven Australians will contest this week’s US Open qualifying draws, hoping to win their way through to a prized berth in the main draw of the year’s final Grand Slam event.

Australia’s female contingent in the qualifying draw consists of Anastasia Rodionova, Sacha Jones and Monique Adamczak. Olivia Rogowska was originally meant to contest qualifying before being awarded a late wildcard into the main draw.

Rodionova spend much of the early parts of 2012 ranked inside the top 100, but has since slipped to No.161 after falling in the first round at Roland Garros, where she was defending a hefty load of points.

Rodionova has a chance to reverse the slide here in New York, where she has drawn 282nd-ranked Tetiana Luzhanska in her opening round qualifying match. Luzhanska, a Ukrainian who now represents the United States, is a meagre 4-14 this season.

Jones will be looking to captialise on the momentum that has seen her soar 100 places in the rankings during 2012.

Having switched allegiances from New Zealand to Australia at the beginning of the year, Jones has performed solidly on the ITF circuit – the highlight being a win at the $25,000 event in Kristinehamn, Sweden – and has qualified for several WTA-level events.

Her task in US Open qualifying is a tough one, however, as she has drawn No.32 seed Tatjana Malek, a German ranked No.142 and who has been as high as No.64.

Returning to New York for the first time in 2009 is Adamczak, who qualified for the tournament that year and will begin her quest to replicate that feat when she takes on American Shelby Rogers, a wildcard entry into the draw.

Looming further down the line in Adamczak’s section of the draw is 22nd seed Karin Knapp and No.1 seed Magdalena Rybarikova.

In men’s qualifying, the Aussie flag will be flown by young trio James Duckworth, Brydan Klein and John-Patrick Smith.

Duckworth broke into the top 200 in early 2012 and has maintained that standard for much of the season.

He appears to be hitting some form on North American hardcourts at just the right time, reaching quarterfinals at the Granby and Lexington challengers before a second-round finish at the prestigious Vancouver challenger.

His opening round foe in Flushing Meadow’s qualifying is American wildcard Chase Buchanan, a 21-year-old ranked No.566.

This season has seen impressive improvements for both Klein and Smith, and both will look to continue their momentum going this week in New York.

Klein, who like Duckworth takes on an American wildcard in the form of Alexios Halebian, has shaved more than 200 places from his ranking since January after excellent results in Futures events – and more recently, Challenger tournaments – around Europe and Asia.

Smith vaulted almost 100 places in one week alone in July after qualifying for and then winning the Winnetka Challenger, in Illinois, United States.

The Queenslander, aged 23 and who spent much of the early part of his career building a formidable tennis resume within the American collegiate system, takes on Chilean Paul Capdeville in his first qualifying match.