Many players are famed for their individuality, style and flare, and it's often reflected in their shoes. We celebrate 10 of the best footwear feats. 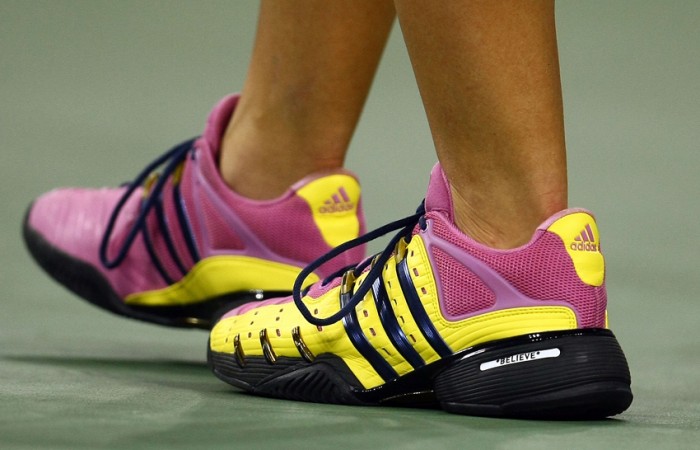 Many players are famed for their individuality, style and flare, and it’s often reflected in their shoes. This Friday, we’ve decided to celebrate 10 of the best footwear feats on tennis courts around the world.

10 & 9. Olympic patriotism
We open today’s countdown with two of the best pairs of shoes on display at the London 2012 Games. At No.10, Andy Roddick showed off his All-American credentials with this flag-themed footwear, while at No.9, women’s doubles silver medallists Andrea Hlavackova and Lucie Hradecka took it up a notch with a nod to their home country in the unlikely form of gumboots. 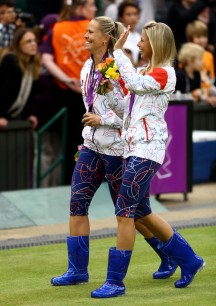 8. Footwear fashionista
Maria Sharapova, who has her name attached to a line of Cole Haan shoes, is regularly seen glamming it up at red carpet events around the world and working a pair of heels just as comfortably as her Nike tennis shoes. The 6-foot-2 Russian towers even higher in this eye-catching pair at the player pre-tournament party at Wimbledon in 2011. 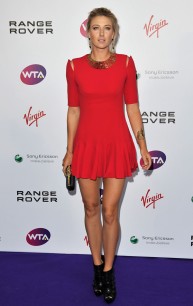 7 & 6. Loud shoes for loud personalities
Novak Djokovic and Serena Williams are among some of the biggest stars in the game, and their extroverted nature and love for the limelight is represented in these eye-catching pairs of shoes – Novak in Rome in 2009, and Serena, on an even more dazzling note, at Roland Garros in 2002.

5. Bombastic boots
Continuing with Serena, we’ve decided to honour one of her more jaw-dropping fashion statements on the tennis court in the following three images. The first is when Williams debuted her famous black knee-high boots during the 2004 US Open, looking more likely to hit a nightclub rather than balls on Arthur Ashe stadium. The follow two are variations on a theme, at the 2005 Australian Open and 2005 Miami Masters respectively. The Aussie Open image shows just how Serena managed to extract herself from the boots – she did so at all three events – after warming up before playing in regular shoes for her matches. 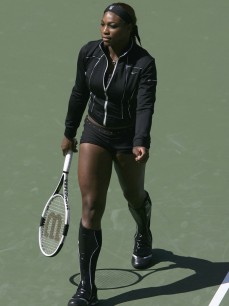 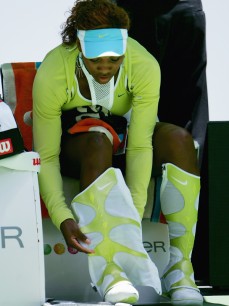 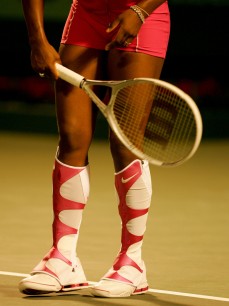 4. Oudin’s mantra
American 17-year-old Melanie Oudin lit up the 2009 US Open, scoring a stunning succession of upset wins over higher-ranked opponents – including Elena Dementieva, Nadia Petrova and Maria Sharapova – to advance to the quarterfinals before rapturous crowds. Her tigerishness and fighting qualities were highlighted on her shoes, with “BELIEVE” inscribed on the side. The belief didn’t last much beyond that run however – struggling with the newfound fame and pressure of her elevated standing in the game as well as suffering from injuries, Oudin plummeted as low as No.370 in early 2012 and is only just starting to show signs of regaining her earlier form.

3 & 2. Honouring achievement
Roger Federer and Rafael Nadal are two of the most decorated tennis players in history. So clothing sponsor Nike – a brand both men endorse – saw it fitting to honour their achievements by inscribing their Wimbledon (Federer, image one) and French Open (Nadal, image two) trophy hauls on their footwear. And, being the great champions they are, the pair duly added to their records in subsequent years, as is evidenced in the latter two photographs. 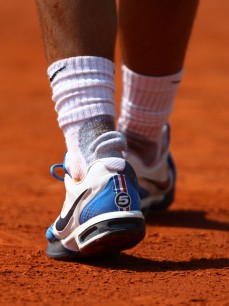 1. Streaker skips away
We complete our countdown not with tennis players’ shoes, but the pair belonging to a man who disrupted those very people. He streaked on court during the 2002 Wimbledon final between Lleyton Hewitt and David Nalbandian, which was won by the Australian, and an unfortunate official was left to the task of cleaning up the trail of destruction.