Defending champion Novak Djokovic has eliminated Australian Bernard Tomic from the Toronto Masters on a day where several big names fell in Canada. 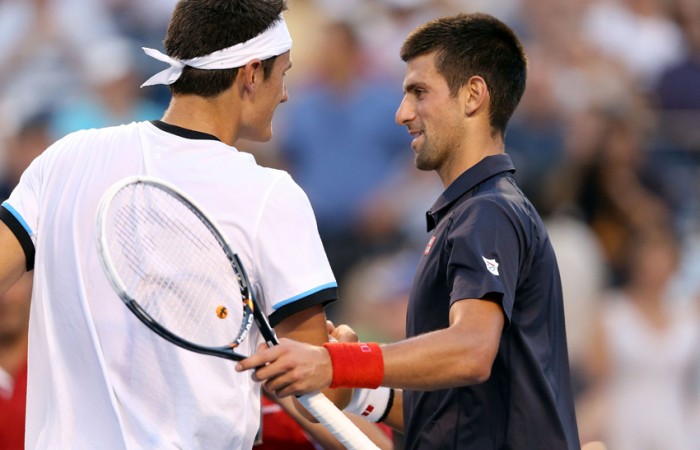 The world No.2 beat Tomic 6-2 6-3 in their second-round match to join Olympic gold medallist Andy Murray in the last 16.

Djokovic out-served the Aussie throughout the one hour, 11 minute contest, winning 86 per cent of points on his first serve and saving all six of the break points he faced.

Djokovic next goes on to play American Sam Querrey, while Tomic will next head to Cincinnati, another prestigious Masters 1000 event on the ATP World Tour.

Murray ground out a painful opening win on Wednesday as the second seed marshalled his resources for a 6-1 6-3 defeat of Flavio Cipolla.

The Scot who only arrived in Canada the day before following his Olympics media duties on Tuesday, but pulled off the win in just under 90 minutes thanks to some help from the ATP trainers.

The world No.4 was treated on his left knee after breaking Cipolla for 3-2 in the second set. Murray was then constantly flexing the knee on his way to victory.

“I was stiff and sore,” Murray said. “I had a lot of matches at the Olympics and this was my first match on hardcourt in four months.”

Organisers presented Murray with a huge chocolate cake celebrating his Olympic medal, with a replica of the honour and its ribbon made of icing.

Given a knife during an on-court ceremony, the gluten-free player gratefully cut off the huge medal corner and took a fork full.

“I haven’t had much time since winning the gold,” he said. “The last few days have been unbelievable – a bit surreal. I’ve been very busy but it’s worth it.”

Like Murray, Tsonga – who has never lost before the semifinals in Canada – said he was dead-tired.

“I’m disappointed because I lost it, but this is the rule. I have to play every week, I have to be here.

“I will not complain. I will just say, ‘Okay, next week I have another tournament,’ I will have some rest, and that’s it.”

Tsonga was the day’s most notable early victim of Olympic fatigue as the ATP schedule hits a run of two straight weeks of 1000-point events before the start of the US Open on August 27.

For Olympic participants, this week marks a return to North American hardcourts after nearly five months on clay and grass.

“I came here Monday night, many players pulled out from here,” said the fatigued South American who looks likely to head straight home for some rest. “It’s not easy to play after a big effort in the Olympics, but I tried anyway.

“Now I need time to recover my body if I want to stay healthy.”