Bernard Tomic and Lleyton Hewitt will try to atone for a forgettable Day 1 for Australia when they take to the courts in Olympic singles action on Sunday. 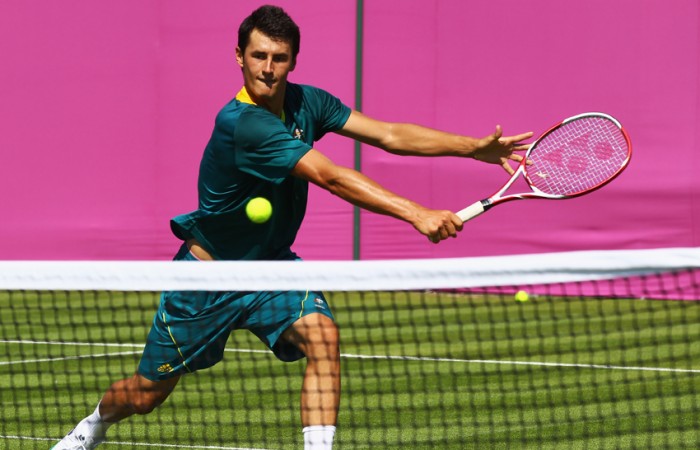 Aussie men Bernard Tomic and Lleyton Hewitt will kick off their Olympic tennis campaigns at the All England Club on Sunday, with both scheduled to play their first round matches on Court 18.

They are Australia’s last remaining hopes for a medal at the London 2012 Olympics after a disappointing Day 1 for the green-and-gold.

Sam Stosur fell in the first round of the singles event, while both Aussie doubles teams – Stosur and Casey Dellacqua, and Jarmila Gajdosova and Anastasia Rodionova – also bowed out in opening round matches.

Tomic will open proceedings on the intimate Wimbledon show court, facing a tough assignment in the form of Japanese 15th seed Kei Nishikori.

The pair have never before met, but Tomic can take comfort from the fact that in four career appearances at Wimbledon, Nishikori has advanced beyond the first round just once.

The Aussie, currently No.49 in the world, has an impressive resume of his own at the All England Club, having reached the quarterfinals in 2011 as a qualifier.

Someone who knows a thing or two about performing well on grass at SW19 is Hewitt, the Wimbledon champion in 2002.

His first round draw is slightly more forgiving than Tomic’s – the South Australian takes on Ukrainian Sergiy Stakhovsky, who like Hewitt qualified for the Olympic tennis event by way of an ITF placing.

This is another match-up featuring players without any prior head-to-head history, but Hewitt will be confident ahead of the first round bout thanks to his recent finals appearance at the ATP grasscourt event in Newport. Stakhovsky, meanwhile, sports an unenviable win-loss record of 10-18 in 2012.