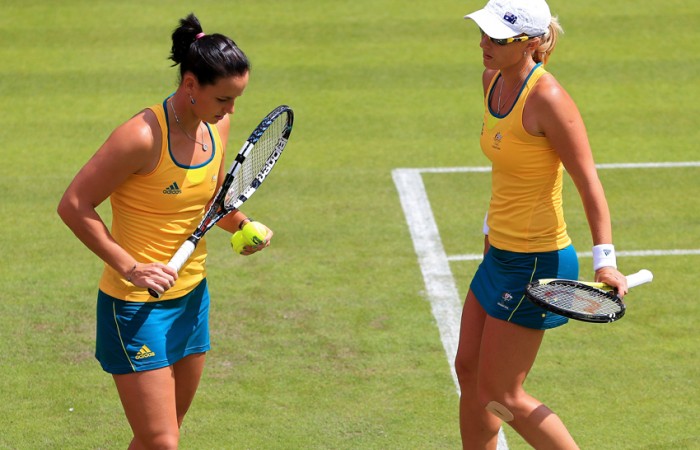 They were followed out of the event later in the day by Sam Stosur and Casey Dellacqua, who were comprehensively beaten by Spanish eighth seeds Nuria Llagostera Vives and Maria Jose Martinez Sanchez.

The loss compounded a miserable day for Stosur, who had earlier gone down 10-8 in the third set to Spaniard Carla Suarez Navarro in singles action.

Stosur and Dellacqua finished with five double faults while the Spaniards hit 22 winners, twice the tally of the Australians.

Llagostera Vives and Martinez Sanchez wrapped up a 6-1 6-1 win in just 59 minutes.

The Russian combination of Makarova and Vesnina was always going to present a tough challenge for Gajdosova and Rodionova, especially given Vesnina’s recent run to the mixed doubles final at Wimbledon just three weeks ago.

Gajdosova and Rodionova, quarterfinalists at the 2012 French Open, went down 6-1 6-4.

The sixth seeds struck twice as many winners (24-12) and were a perfect three-from-three on break points, helping them to victory in just over an hour.