Olympics: Aussies in action on Day 1

Saturday is when Australia's women will fly the national flag, with the entire female tennis squad in action on Day 1 of the Olympic tennis event. 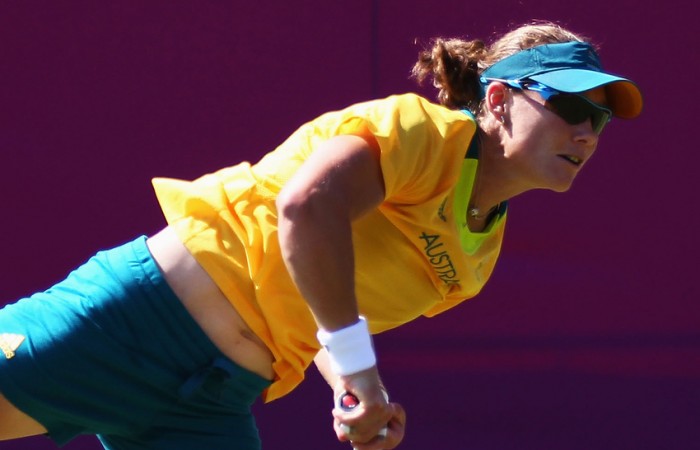 It’s a day for the Aussie women to fly the nation’s flag on Day 1 of the Olympic tennis event at London 2012, with all members of Australia’s female tennis squad in action at the All England Club.

The main focus will be on No.5 seed Sam Stosur in the singles, as she takes on Carla Suarez Navarro in her first round match.

Despite Wimbledon, and grass in general, having never represented Stosur’s happiest hunting ground, the Queenslander will nevertheless be confident going into her match against the Spaniard.

Stosur comfortably defeated Suarez Navarro just a month ago on the very same courts in the first round of the 2012 Wimbledon Championships.

She will battle Suarez Navarro, currently ranked 45th, in the second match of the day on No.1 Court.

Stosur will then return for her doubles rubber alongside Casey Dellacqua, with the pair looking to build on their encouraging form last month at Wimbledon when they take on No.8 seeds Nuria Llagostera Vives and Maria Jose Martinez Sanchez of Spain.

Stosur and Dellacqua reached the second round at The Championships and almost toppled top seeds Liezel Huber and Lisa Raymond before succumbing in three tough sets.

They’ll get a chance to atone for that loss when they appear in the last match of the day on Court 12.

Also in action will be Australia’s other pairing of Jarmila Gajdosova and Anastasia Rodionova, who take on 6th seeds Ekaterina Makarova and Elena Vesnina of Russia.

Gajdosova and Rodionova also have a history of combining well, and recently reached the quarterfinals of the French Open.

Aussie men Lleyton Hewitt and Bernard Tomic will both take part in singles action on Day 2.

> check out Hewitt’s take on all things Olympic