It’s hard to find a player more excited to represent their country than Casey Dellacqua, and she'll get a chance to just that at the London 2012 Olympic Games. 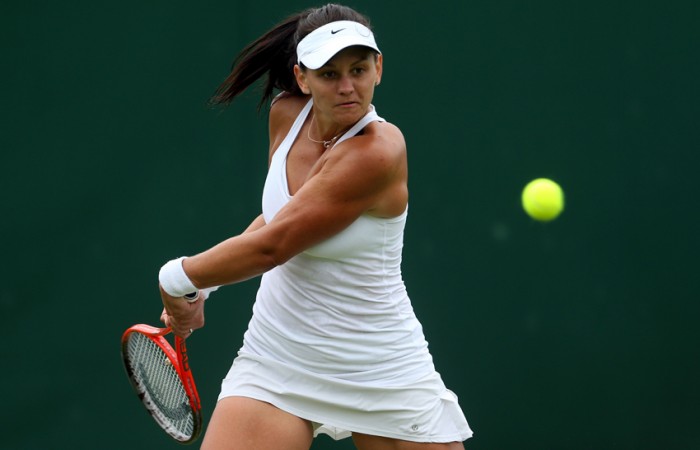 It’s hard to find a player more excited to represent their country than Casey Dellacqua.

And the bubbly 27-year-old from Western Australia will get her chance to do so in one of the best ways possible when she competes for the green-and-gold at the London 2012 Olympic Games.

“It is an honour to represent your country and I love nothing more than playing for Australia. My favourite weeks of the years are playing Fed Cup for Australia,” she enthuses.

“I am so excited to be going to my second Olympics. Beijing was such an amazing experience for me and I am just thrilled to be going to London. For tennis players it’s extra special to be going to the London Olympics as we are playing at Wimbledon and you can’t get a better combination than that.”

Dellacqua described walking out for the opening ceremony in Beijing as an incredible experience, and no doubt one which buoyed her into the second round of the singles event, where she eventually fell to Victoria Azarenka. In doubles, she partnered former world No.8 Alicia Molik yet went down in the first round.

This time around, there will be no singles for Dellacqua, and she will team with Sam Stosur in the doubles.

It’s a partnership that’s beginning to bear fruit. The duo won through to the second round of Wimbledon just three weeks ago, pushing top seeds Liezel Huber and Lisa Raymond to the limit in a high-quality match before losing 5-7 6-3 6-4.

“I really believe that Sam and I can go far in the doubles event and of course I’d love to win a medal,” Dellacqua said.

“Sam is a great doubles partner. We only started to play a bit together this year but we have clicked well and it helps when you’re good friends off the court too. We enjoy ourselves and want to win and I also think we compliment each other’s playing styles.”

The pair have also followed similar preparations for the Olympics since the Wimbledon fortnight ended. Like Stosur, Dellacqua returned home to Sydney and enjoyed the chance to both train and relax ahead of the Games.

The Western Australian has for a year been living in Maroubra, a south-eastern beachside suburb. The appeal of the area lies in its close proximity to beaches, cafes and restaurants. “Everything is in walking distance for me if I want to head to the beach or grab a coffee. I find Maroubra really laid back and not too busy which is perfect for when I have had months on the road and just want to chill out at home,” she explains.

But there hasn’t been time for too much chilling out. Dellacqua has been hitting the practice courts at the Olympic Park Tennis Centre in Homebush, as well as being put through her paces by trainers Nathan and Giselle Martin, mixing sessions up between their Bondi Junction studio and eastern suburbs beaches for some variety.

And she has since returned to London, taking part in a training camp this week with other members of the Aussie tennis squad.

Despite the busy workload, Dellacqua believes it will stand her in good stead when the Olympic tennis event commences on Saturday 28 July.

“My preparation has been good. I haven’t stopped training really as I have been playing tournaments every week since April leading into the French Open and then onto the grass for Wimbledon,” she says.

No doubt Dellacqua is enjoying that fact that she’s healthy again and able to play a full schedule of events, after injuries to her shoulder and foot ravaged her 2009 and 2010 seasons. Unranked in early 2011 when she made her first steps toward a return, she now sits just outside the top 100 in singles and is on the verge of cracking the doubles top 50.

It’s been a remarkable comeback, and one which could be made all the more significant with an exciting run at the London 2012 Olympics.

Whatever the result, Dellacqua knows she’s going to enjoy every minute.

“Being in London representing Australia with Sam and the rest of the Olympic team will be something I will never forget.”