Australian top seed Luke Saville has advanced to the final in defence of his Wimbledon junior crown. 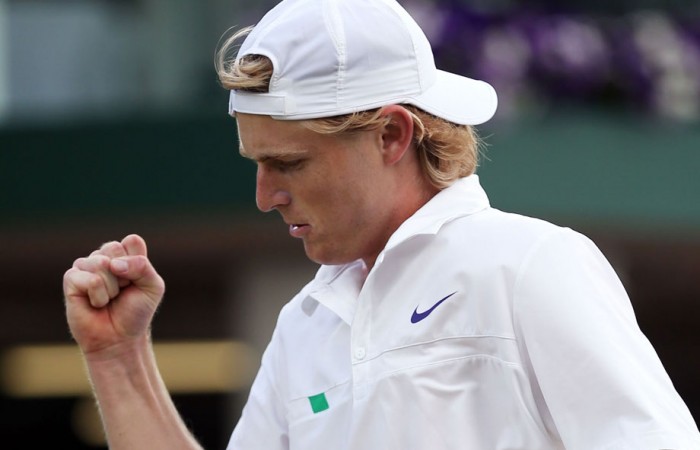 Australian top seed Luke Saville has advanced to the final in defence of his Wimbledon junior crown.

The 18-year-old South Australian won that Melbourne Park encounter so will be bidding to join the likes of Swedish all-time great Stefan Edberg as a triple junior grand slam champion.

Tennis great John Newcombe applauded Saville for “putting himself out there” to try to defend his title. Other prodigies like Lleyton Hewitt and Bernard Tomic ditched the juniors for the pro ranks much earlier in their careers, but Newcombe believes Saville has made the right call to stick around for one more year before taking on the big boys.

Saville is hoping to become the first player since 1974 to go back-to-back in the boys’ championship at the All England Club.

“It would be absolutely huge,” Saville said.

“To have my name on the honour board already is huge, but I’d love to have it on there twice – it hasn’t happened in something like 38 years.”

But even if he failed to do so at Wimbledon, Newcombe said Saville was showing all the promise of a future star in the pro ranks.

“He’s doing well on all the surfaces,” Newcombe told AAP.

“He’s got a good platform now to move into the next stage of his career.

“He seems to have a really solid all-round game and he looks a good competitor. That’s the main thing.

“He probably needs to develop that solid all-round game into some big weapons, but having the natural ability to fight hard is a big plus.”

Saville said the easy thing to do after lifting the trophy last year would have been to walk away.

But he loves the competition and is relishing the challenge of “being the hunted” this year as the top seed and titleholder.

Newcombe, himself a five-times grand slam junior champion before turning pro and winning seven majors and rising to world No.1, reckons the boom youngster has made the right move.

“When Lleyton was there, my advice to him was not to play the juniors, but I thought Lleyton was ready for open company,” Newcombe said.

“Luke’s probably not quite at that stage yet. I always think that it’s great to put yourself on the line.

“If he was ready to go into open company, I’d say give it a go.