David Nalbandian was fined the maximum E10,000 (AUD$12,650) and placed under police investigation for assault after kicking an advertising board and injuring a line judge during the Queen's Club tennis final. 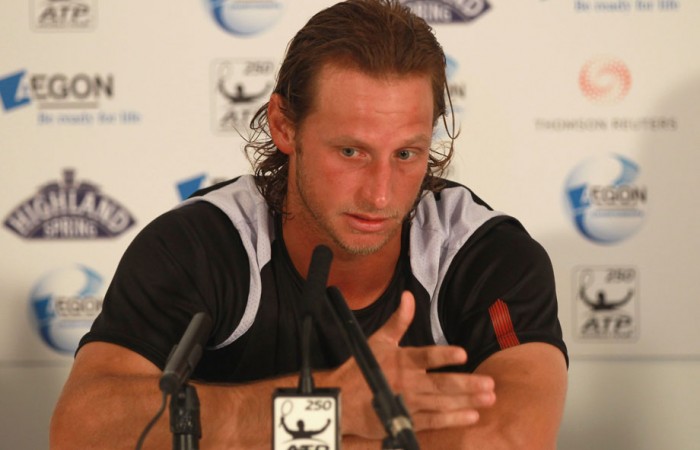 David Nalbandian was fined the maximum E10,000 (AUD$12,650) and placed under police investigation for assault after kicking an advertising board and injuring a line judge during the Queen’s Club tennis final.

The ATP confirmed the fine for unsportsmanlike conduct on Monday and said the Argentine player also was stripped of his prize money of STG36,500 (AUD$57,000).

London police, meanwhile, said they were investigating a complaint of assault filed against Nalbandian, who was defaulted from Sunday’s match against Marin Cilic in the grasscourt Wimbledon warmup event.

Police declined to say who made the complaint. Any member of the public who witnessed the event in person or on television could have made a complaint, as could the line judge himself.

Nalbandian won the first set 7-6 (3) but lost his temper after losing serve to fall behind 3-4 in the second. After missing a running forehand on game point, he kicked the board under the chair of line judge Andrew McDougall. A piece of the board cut the judge on the left shin, leaving him bloodied.

Nalbandian was disqualified for unsportsmanlike conduct as ATP rules state that any violent action will result in an automatic default.

Nalbandian, who is still scheduled to play at Wimbledon when it starts on Monday, insisted he shouldn’t have been disqualified.

“Sometimes you get very frustrated on court and it’s tough to control that, and sometimes I do a mistake. So it’s very tough to end a final like that,” he said.

“I agree I do a mistake but sometimes everybody do a mistake and I didn’t feel it had to end like that, especially in a final.”