Nalbandian kicked out of final

Argentina's David Nalbandian was sensationally disqualified from the Queen's Club ATP final on Sunday for angrily kicking an advertising board at a line judge which left the official suffering a gashed and bloodied leg. 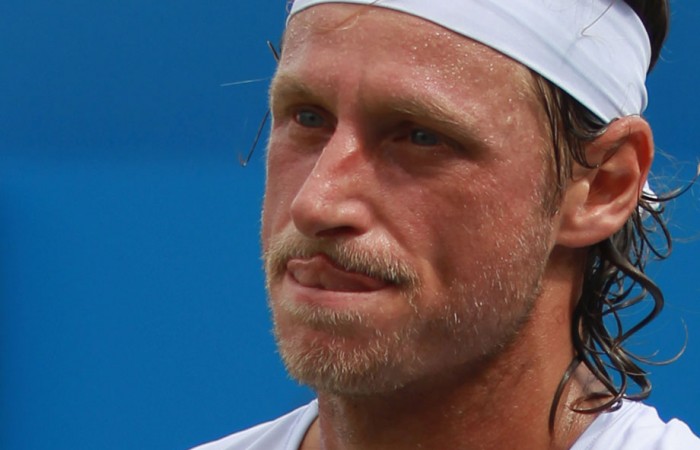 Argentina’s David Nalbandian was sensationally disqualified from the Queen’s Club ATP final on Sunday for angrily kicking an advertising board at a line judge which left the official suffering a gashed and bloodied leg.

The fiery Nalbandian, who had won the first set 7-6 (7-3) against Croatia’s Marin Cilic, had just lost his serve to fall 4-3 down in the second when he reacted with a frustrated kick at the board, which was just in front of line judge Andrew McDougall.

A stunned McDougall then rolled up his trousers to reveal a bloody gash on his leg before appearing to remonstrate with Nalbandian.

Play came to a halt and after a delay of several minutes, ATP supervisor Tom Barnes came onto the court to speak to umpire Fergus Murphy and Nalbandian.

It soon emerged that the 30-year-old’s petulant behaviour had been punished with disqualification “due to unsportsmanlike behaviour”.

Nalbandian responded by waving his arms in frustration while the 6,000-capacity crowd jeered, but the former Wimbledon finalist later returned to the court to apologise for his actions.

“I am sorry to do that. Sometimes we get very frustrated here on court. It is tough to control,” he said, before also launching into a rant against ATP chiefs.

“It is a mistake. It is a tough moment to end a final like that. Sometimes we feel the pressure from the ATP. It is a mistake and I have to pay for that. Everybody makes mistakes.”

Barnes said that Nalbandian had accepted the sanction and said further punishment was likely to follow.

“He knows the rules and knew what was going to happen. He didn’t do it intentionally. He lost control and a guy got hurt,” said Barnes.

“I am not surprised by what he said about the ATP.”

Nalbandian was understood to be unhappy with playing conditions at the Queen’s Club, a traditional warm-up event for Wimbledon, where the schedule had been badly affected by rain all week.

“The grass had been slippery. Maybe he thought it wasn’t safe. But the courts were playable,” added Barnes.