Kokkinakis edges Cilic in a classic to reach Adelaide final 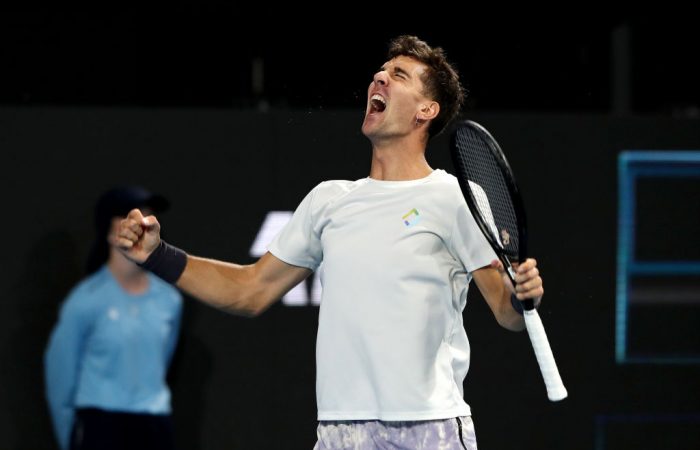 In an early contender for match of the season, Thanasi Kokkinakis has won his way into his first ATP final in almost five years.

Kokkinakis needed seven match points – and saved two of his own – to prevail in the third set tiebreak, as finally the sporting gods who have been so cruel to him smiled down from above.

“It’s been almost five years so I’ll try and enjoy it and soak it all in,” Kokkinakis said.

“I’ll try and mentally and physically prepare as best I can … I’ve just got to back myself.”

The Adelaide local was practically flawless in the opening set, taking control from the very first point of the match.

Kokkinakis grabbed a break in the opening game of the night, before consolidating comfortably to take an early 2-0 lead.

He fought off his only break point of the set, winning three points in a row with clean winners to hold serve, before breaking Cilic again in the seventh game to take an unassailable lead.

Kokkinakis held serve to love to claim the set 6-2 in 38 minutes against the former US Open champion.

The South Australian made just two unforced errors in the opening set, with Cilic racking up 13.

“I couldn’t play too much better than I did early,” the Australian said.

“He started to get on top after that and I just had to will myself through.”

The moment @TKokkinakis defeated No. 3 seed Cilic and made the final in Adelaide! pic.twitter.com/XYuYTgw9ij

Kokkinakis largely maintained his level in the second set but Cilic raised his significantly, with the three-time Grand Slam finalist getting into a strong serving rhythm.

Cilic won a remarkable 100 per cent of points on first serve during that second set and unsurprisingly he faced no break points after losing his serve twice in the opener.

As he increased the pressure, he eventually broke Kokkinakis in the eighth game before strongly serving it out to level the match.

With momentum running his way, he immediately broke Kokkinakis to start the third set.

The Australian had spent nearly double the amount of time on court compared to Cilic this year, and it appeared fatigue might be kicking in when he dropped four straight games and trailed 0-2 in the third set.

But Kokkinakis broke back at his next chance, to get things on serve once more.

At 3-3 Kokkinakis was on the brink again at 15-40 but found four consecutive big serves to hold.

From those break points to the tiebreak, Kokkinakis did not drop a single point on serve, He collected 12 in a row as he established a groove and racing to a 6-2 lead in the tiebreak.

But Cilic would not be denied, saving all four match points and setting one up for himself.

At 6-7 Kokkinakis produced a screeching forehand winner to stay in the contest. He saved another match point with an ace.

On the local’s seventh match point, Cilic found the net and Kokkinakis at last secured victory.

“At 6-2, I tightened up like nothing else” Kokkinakis said. “I thought I could either go into my shell or I could decide not to die wondering.

“I hit some big serves and got through it on adrenaline, plus the crowd was amazing.”

He will now play world No.58 Arthur Rinderknech of France in a Saturday night final.

“I watched a bit of him in the ATP Cup. He’s got a great serve and he’s had a super week,” said Kokkinakis.

“I’ve just got be ready and make sure I back myself.”

Kokkinakis thanked the crowd for getting him through tonight's epic – but made one request at the end. ❤️