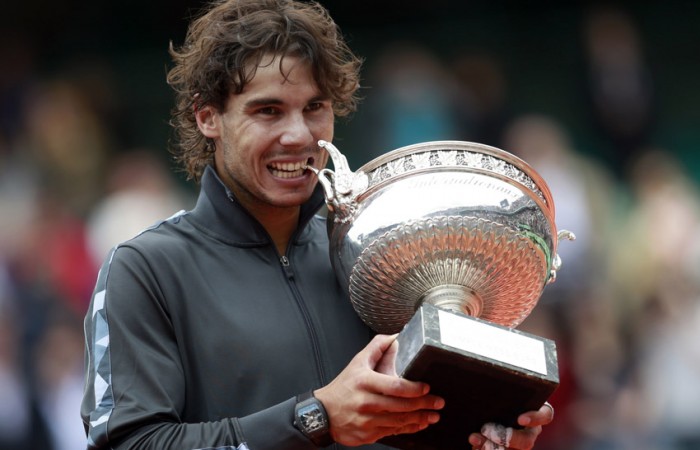 After a nerve-wracking overnight wait, Nadal returned to Roland Garros on Monday to complete a suspense-filled 6-4 6-3 2-6 7-5 victory over the world No.1 after the most-anticipated match of the year had been controversially suspended on Sunday because of rain.

In thwarting Djokovic’s quest to become the first man in 43 years to hold all four majors, Nadal etched his own name in the tennis history books by surpassing Bjorn Borg with an unprecedented seven Roland Garros crowns.

“I’m really, really emotional and it’s probably one of the more special moments of my career.”

Only Roger Federer (16), Pete Sampras (14) and Roy Emerson (12) have won more and now the chase to reel in Federer’s record haul is suddenly back on after the Spaniard broke a painful run of three consecutive grand slam final losses to Djokovic.

Djokovic had been threatening a sporting miracle when the final continued in showers and sunshine on Monday, with the top seed leading 2-1 with a service break in the fourth set.

He had trailed by two sets and 2-0 on Sunday before winning eight straight games in an extraordinary turnaround as Nadal moaned to tournament referee Stefan Fransson about playing in persistent drizzle for almost three hours before the match was abandoned for the night.

The prospect of Djokovic being only the second player in 76 matches to conquer Nadal in a best-of-five-sets claycourt encounter could not be ruled out.

In an incredible 27-match grand slam winning streak, Djokovic saved two match points in last year’s US Open semifinals against Roger Federer, recovered from a service break down in the fifth set to deny Nadal in a near-six-hour epic Australian Open decider and fought off four more match points against Jo-Wilfried Tsonga in the quarterfinals in Paris.

The Serb also trailed Andreas Seppi two sets to love in the fourth round.

But a comeback from two sets and a break down against the greatest claycourter in history proved beyond even this modern-day tennis Houdini.

Nadal broke Djokovic in the first game upon the resumption on Monday to level at 2-2 in the fourth set.

He then took the match on a Djokovic double-fault and burst into tears after three hours and 49 tension-filled minutes – three hours on Sunday and 49 minutes on Monday.

“I hope to come back next year and play even better.”

Djokovic had been striving to become the first man since Laver in 1969 to complete a grand slam sweep – and only third ever including Don Budge in 1938 – after claiming the Wimbledon, US Open and Australian Open trophies in six supreme months.

Nadal has lost just once in 53 matches at the French Open, dating back to his debut as an 18-year-old when he won the tournament in 2005.