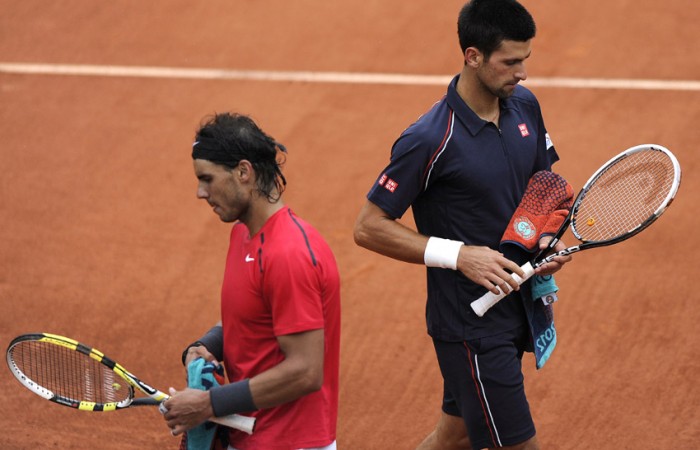 Rafael Nadal was holding a tenuous two-sets-to-one lead over Novak Djokovic when rain forced an overnight suspension of their French Open final blockbuster in Paris.

The two combatants were asked to resume hostilities at 1pm on Monday.

Chasing a record seventh Roland Garros crown and trying to thwart Djokovic’s quest for a rare grand slam sweep, Nadal had an angry exchange with tournament referee Stefan Fransson when the Swede called the second stoppage.

The Spaniard was demanding to know why the final wasn’t stopped sooner.

With the match being played in persistent drizzle, the Spaniard had been complaining for about an hour about the conditions, saying he was struggling to see the ball because it was taking on too much clay.

The match looked almost over as Nadal charged to a two-set advantage and grabbed an early service break in the third.

But from 2-0 up the six-times champion lost eight consecutive games in an extraordinary turnaround.

Earlier, Djokovic obliterated his changeover chair as Nadal seemed poised to shatter the Serb’s grand slam dreams and etch his own name in the history books by surpassing Bjorn Borg with an unprecedented seventh French Open title.

Djokovic had been striving to become the first man since Rod Laver in 1969 to hold all four majors after claiming the Wimbledon, US Open and Australian Open trophies in six supreme months.

But unable to penetrate Nadal’s incredible defences, the frustrated Serb instead smashed his racquet through the Perrier-branded boarding below his courtside seat as his dream began to slip away.

Djokovic had just double-faulted to fall a break down at 3-4 in the second set when he received a code violation.

The first, 32-minute, rain stoppage a game later – during which the damaged seating was removed from Court Philippe Chatrier – didn’t help the Serb.

Upon the resumption, Nadal immediately broke Djokovic once more with a brilliant lunging backhand crosscourt pass to take a stranglehold on the match leading two sets to love.

When Nadal broke for 2-0 in the third, there appeared no possible way back for Djokovic – even given he fought off four match points in the quarterfinals against Jo-Wilfried Tsonga after rallying from two sets down to beat Andreas Seppi in the fourth round.

Suddenly then the fickle weather threatened to change the course of sporting history.