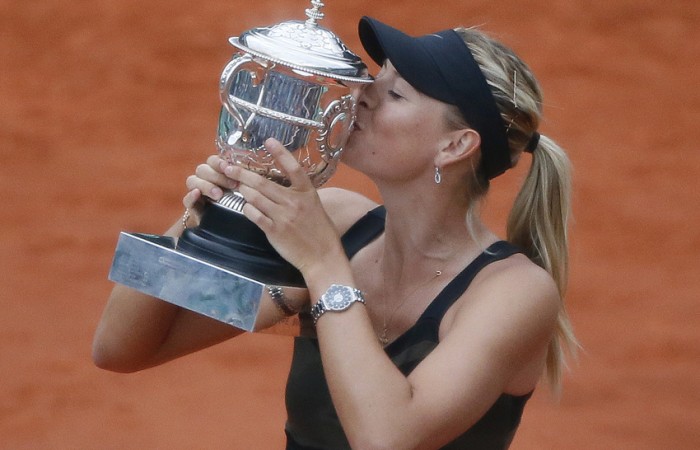 She vows there’s lot more to come, but Maria Sharapova hailed her emotional French Open final triumph as the crowning achievement of her tennis career.

Sharapova’s commanding 6-3 6-2 victory over Italian Sara Errani on Saturday completed a rare grand slam set for the Russian superstar, placing her among the all-time greats of the game.

The Siberian-born newly-crowned world No.1 achieved the feat three years after returning from career-threatening shoulder surgery ranked No.126 and on a surface on which she’d famously once likened her movement to that of “a cow on ice”.

“I never thought I’d like red clay, but I do. It’s beautiful,” the 25-year-old said after finally getting her hands on the Coupe Suzanne Lenglen.

“It’s surreal. It’s the most unique moment I’ve experienced in my career. I never thought I would have that.

“When I won Wimbledon at 17, I thought that would be the most treasured moment of my career. But when I fell down on my knees today, I realised that this was extremely special, and even more so.”

Sharapova’s story gets better with each title she wins.

At just seven, her father Yuri, with less than $100 in his pocket, dragged his daughter to America on a wing and prayer.

“It’s a long journey. It started from a very young age,” she said.

“It’s not over yet. I’m not sitting here and saying I’m done because I’m far from it.

“I have a lot more in me to achieve. I believe in my game.

“I always strive to be better. And one per cent here, a few here – this is what I’ve always wanted to achieve.

“I never made excuses.”

Earning an estimated $25 million a year in prize money and endorsements, Sharapova is the highest-paid and most-photographed women’s athlete on the planet.

But the “it” girl of sport says tennis remains the most important part of her life.

“I had so many outs in my career. I could have said: ‘I don’t need this. I have money, I have fame, I have victories, I have grand slams’.

“But when your love for something is bigger than all those things, you continue to keep getting up in the morning when it’s freezing outside, when you know that it can be the most difficult day, when nothing is working.

“You can achieve great things when you don’t listen to all those things.”

What Sharapova achieved in Paris is something only nine other women have achieved in tennis history.

The breakthrough victory follows her teenage triumph at Wimbledon in 2004 and 2006 US Open and 2008 Australian Open successes.

Her next assignment is Wimbledon starting on June 25.

“I’m actually debating with my coach whether I should have three or four days off. I’m going for four – he’s going for three, which is very typical,” Sharapova said.