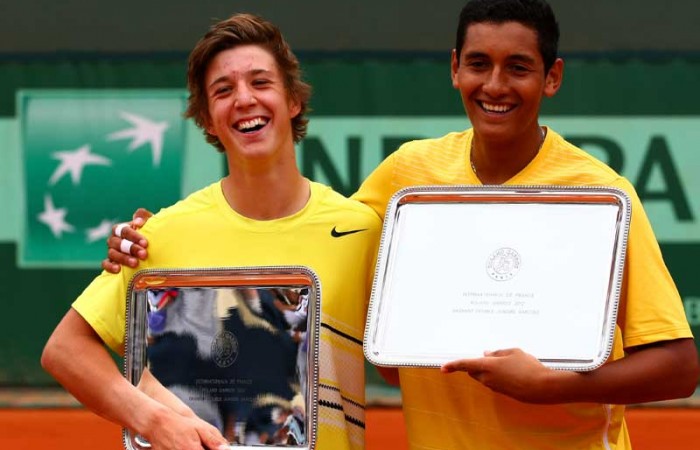 The unseeded pair pulled out an extraordinary effort to defeat Czech duo and No.7 seeds Adam Pavlasek and Vaclav Safranek 6-4 2-6 [10-7] in just 64 minutes.

Kyrgios, a current AIS Pro Tour Program member and Harris, an AIS visiting scholarship holder, began their tournament strongly with a 6-4 7-5 victory over Spain’s Albert Alcaraz  Ivorra and Eduard Esteve Lobato before overcoming No.8 seeds Luke Bambridge (GBR) and Kaichi Uchida (JPN) 5-7 6-4 [10-8] in the second round.

The pair were then tested by Arjun Kadhe (IND) and Jorge Brian Panta Herreros (PER) in the quarterfinals, eventually defeating the duo 6-2 5-7 [11-9] before breezing through to the final after a 6-1 6-3 win over France’s Enzo Couacaud and Alexandre Favrot in the semis.

The boys were rapt with their result and the way they played last night. “It feels really good,” said Harris after the match.

“We were lucky to get out of our quarterfinal; we were 9-6 down in the super tiebreak so we made the most of that luck and got the win, so we’re very happy.”

Kyrgios was just as pleased post match and was looking forward to taking their form to the next junior grand slam.

“We’ve been working pretty hard. We haven’t been playing doubles too long but it’s a very good experience and it would be great if we can carry it on to Wimbledon,” Kyrgios said.

“I think the grass will be perfect for us. We’re great returners, clutch under pressure and the grass helps our serve. We just need to stay tough and we should do well.”

“Anytime our athletes have the opportunity to compete on the world stage, like Roland Garros, provides them with a chance to improve and have success under pressure. Last night the boys did this,” Edney said.

“The win will provide them with a lot of confidence moving forward into the next two weeks while they play Pro Circuit events in Germany before travelling to London for the grass court season.

“It’s a credit to the work the boys have put in up to this point and their teams including Des Tyson, Todd Larkham and Simon Rea, who have worked really hard around them to help provide these opportunities.”