Australia's Destanee Aiava has won the Longines Future Aces tournament at Roland Garros, romping through the international field without the loss of a set. 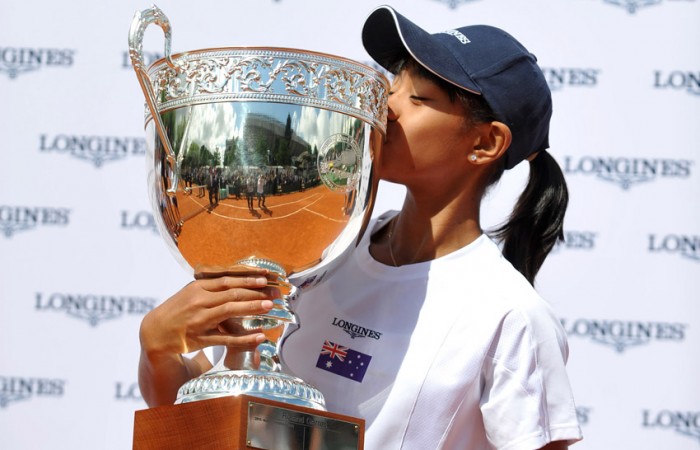 Australian Destanee Aiava has won the Longines Future Aces title at Roland Garros, and was rewarded with the chance to hit with tennis legend Steffi Graf.

Aiava defeated Japan’s Haruna Arakawa 4-2 5-3 in the final of the 13-and-under event, capping an impressive tournament in which she did not drop a set.

Following the final, Aiava teamed up with Graf for an exhibition doubles match, against Haruma and current world No.13 Sabine Lisicki of Germany.

The 12-year-old from Narre Warren said she had taken a liking to the Parisian clay, in what has been her first taste of international competition.

“I like playing on clay and I feel comfortable. I like the new places we’ve been to and it’s a good place to play. I like the courts and the stadium,” she said.

It was evident in her play at Roland Garros – she straight-setted three opponents on her path to the final, including a comprehensive 4-0 4-1 victory over Luna Milovanovic of Switzerland in the semifinals.

Motivating her was the prospect of hitting with 22-time Grand Slam winner Graf, a Longines ambassador.

“It will be really exciting and it will be a great honour to play (with) someone who was a professional player,”  she said.

Tennis Australia’s Head of Professional Tennis Todd Woodbridge said Aiava’s appearance at the Longines event at Roland Garros has been a great competitive opportunity for the Victorian.

“As Australia’s top-ranked girl in her age group she’s had the chance to test herself against the best in the world and come out on top. It’s a fantastic result and hopefully the start of a successful career,” he said.

“But it’s only just the beginning for her and there’s a lot of hard work ahead. She already has an excellent work ethic and we look forward to seeing her development.”

Aiava discussed that very work ethic during her time in Paris.

“I train in the morning at squad, doing tennis, and then sometimes I have strength and conditioning with my dad. In the afternoon (it’s) just
tennis, hitting on court. I train for four hours a day,” she revealed.

As a result of reaching the final, Aiava will receive full funding from Longines up until her 16th birthday to put towards her tennis equipment.