The world's top two, Novak Djokovic and Rafael Nadal, will meet for the fourth straight time in a major final after both won their French Open semis in straight sets. 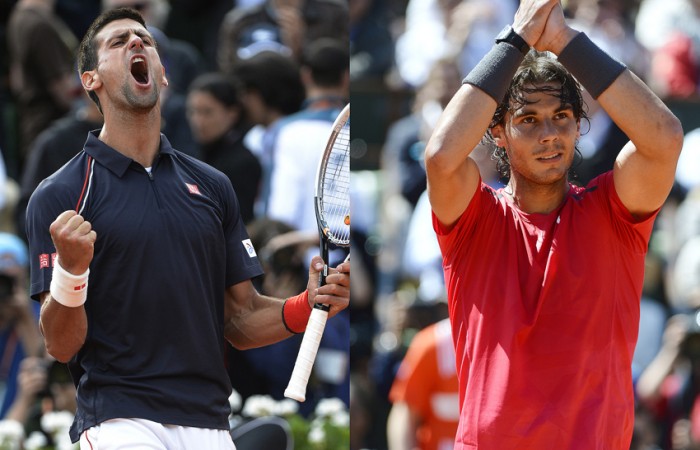 On Sunday, history will be made as a win for Djokovic will make him only the third man to hold all four grand slam trophies at the same time.

A win for Nadal, whose record in Paris now stands at 51 wins against just one defeat, will mean he’d be the first man to win the French Open seven times, breaking a tie with Swedish legend Bjorn Borg.

“I am happy to be in the final here, it’s always difficult to play against Roger,” said Djokovic, who had his 43-match winning streak ended by Federer at the same stage of Roland Garros 12 months ago.

“It’s a dream to be in the final, but Rafa, who always plays so well here, will be the favourite.”

Both Djokovic and Federer had looked far from convincing in reaching this stage.

Djokovic came back from two sets to love down to beat Andreas Seppi in the fourth round before saving four match points against Jo-Wilfried Tsonga in a five-set quarterfinal.

Federer had also been two sets to love down to Juan Martin del Potro in his five-set, last eight match before battling back.

The Swiss world No.3 ended Friday’s match with an uncharacteristic 46 unforced errors, caused to some extent by the swirling wind inside the Philippe Chatrier court.

He was also left to regret twice squandering early breaks in the first two sets.

Defeat also ended Federer’s hopes of making a 24th grand slam final while extending his long wait to add to his record 16 majors, the last of which came at the 2010 Australian Open.

“He played well under difficult conditions,” said Federer, who had been 3-0 and 5-4 ahead in the second set.

“But I had chances. There are no excuses. I tried and if I had won that second set, it would have been a different match. But it didn’t work out.”

Nadal said his demolition of Ferrer was one of the most complete matches he has played for some time.

The Spaniard was only briefly troubled at the start of the match, saving two break points in the fourth game before accelerating away for victory.

It was, he said, “one of my best matches on this court.”

“In my opinion I did almost everything right, because my serve worked very well, changing directions.

“My backhand was at its best so far today. I hit the forehand well during all the tournament. Today wasn’t an exception.”

The win sees Nadal into his seventh final in eight years and once again he has done so without dropping a set. In fact he has only once had his serve broken, in the second set of his first round tie against Simone Bolelli.