Wimbledon in sights for Stosur, Saville

Sam Stosur and Luke Saville are hoping that good performances at Roland Garros translate to success at Wimbledon when they head there in a month's time. 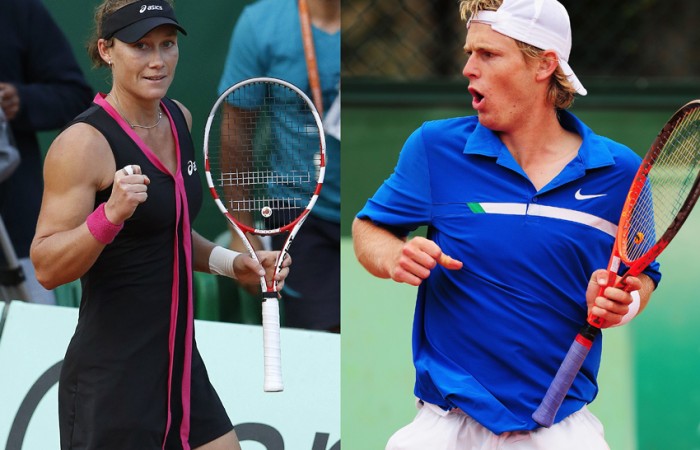 Sam Stosur’s French Open charge has set her up for a career-best seeding at Wimbledon this month.

The grasscourt grand slam has been Stosur’s least successful of the four annual majors, with the US Open champion’s record at the All England Club showing just five wins from 14 matches.

The 28-year-old has ventured beyond the second round only once in nine visits, a staggering statistic considering Stosur possesses the biggest forehand and one of the best serves in women’s tennis.

But Stosur’s impressive run at Roland Garros could boost her prospects of finally delivering on the greatest stage in tennis.

Stosur is guaranteed to climb above Serena Williams to No.5 in the world after the French Open and could rise further up the rankings with a decent run at ‘s-Hertogenosch, her only grasscourt lead-up event before Wimbledon, which starts on June 25.

The Queenslander is delighted by the way she has managed to her turn her year around after a forgettable Australian summer.

Since suffering demoralising first-round defeats in Sydney and at the Australian Open, Stosur has made one final, a semi-final, three quarter-finals and gone unbeaten in four Fed Cup matches for Australia.

“Of course I didn’t play very well throughout January and the Australian Open was quite a disaster,” she said ahead of her French Open quarterfinal against Dominika Cibulkova on Tuesday (starting at 10pm AEST).

“But then once I left, I kind of forgot about it and realised that the world didn’t end, it’s not the end of the world, there’s still nine months of tennis to play for the year and things can turn around.

“So I think if you really keep it in the big picture like that, you can turn things around.”

Meanwhile, Australian teenage tennis ace Luke Saville is angling for a Wimbledon wildcard as he eyes a third grand slam junior crown at the French Open.

Already in rare company alongside Bernard Tomic and Pat Cash as a dual junior major winner, 18-year-old Saville has charged through to the third round of the boys’ singles event in Paris.

“It’s always nice to get your teeth into a tournament,” said Saville, the world’s top-ranked junior.

“I always set the standard very high for me. I won the last grand slam and this is obviously a very different tournament for me – Europeans and South Americans play a lot on clay, Australians not so much.

“But I’m going into every match to win. If it doesn’t happen, then so be it. But I’m confident with how I’m going.”

Regardless how he fares at Roland Garros, Saville is hoping he has done enough since winning the Wimbledon junior title last year – and then the Australian Open juniors in January – for the All England Club to give him a shot at the big boys next month.

“I haven’t heard anything yet. Obviously I’m hoping that I can get a run in the men’s. If I don’t, I’ll play the juniors again,” he said.

“But I’ve won two slams now and I’ve got my ranking to around 590 now, so I think I’ve made a lot of good steps.

“So if I get granted a wildcard into the qualifying, or the main draw, I’ll obviously take it with both hands.”