Stosur to battle Cibulkova on Day 10 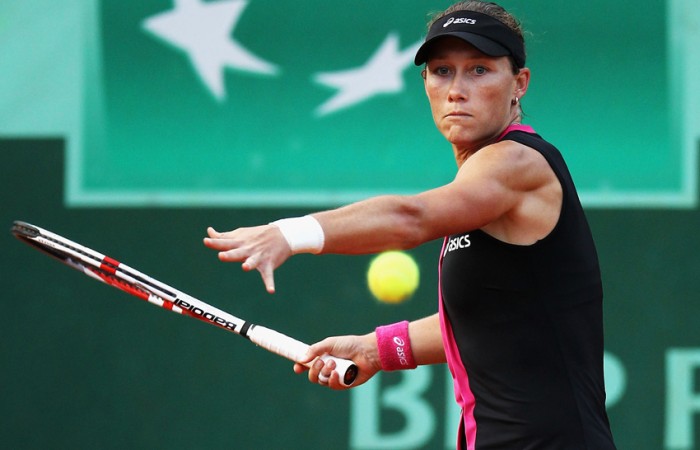 Coach David Taylor has urged Sam Stosur to use her revolutionary forehand to wipe her French Open quarterfinal opponent off the court at Roland Garros on Tuesday.

Also in action on Day 10 at the French Open will be Australia’s junior contingent, with all four boys winning their singles matches on Monday and hoping to continue their progress through the draw in Paris.

Stosur faces Slovakian Dominika Cibulkova in the first match on Court Philippe Chatrier (starting 10pm AEST) and Taylor says it’s the perfect match-up for the sixth seed against one of the shortest players on the women’s tour.

Cibulkova stands just 161cm tall and Taylor will instruct Stosur to attack the 15th seed from the get-go – and not to play passively like she did early in her fourth-round win over American teenager Sloane Stephens.

“She’s got the ability early in the rally to get the ball outside that girl’s hitting zone. If she’s got good conviction mentally, I think she’ll be right.

Stosur found herself in a hole at 5-3 down in the first set against the free-swinging Stephens and Taylor hopes the US Open champion learnt a lesson to back her attacking game.

“She was just playing passive at the beginning and the girl was just teeing off,” he said.

“Sam took the time away from her and the match changed quickly.”

“Has there ever been a heavier forehand in women’s tennis? Honestly, I would have to say no.

“The beauty is that it’s not Sydney or the bush. It’s not taking huge risks to hit winners. The regulation rally shot is heavy enough to do damage. Sam is proving that it’s possible for women to hit that type of forehand.

“A lot of great women’s players have basically been backhand players. I think in years to come, as the women start hitting their forehands with those kind of revs, we’ll look back and see that Sam was the one who started it.”

Stosur beat Cibulkova in straight sets in their only previous meeting, on a Stanford hardcourt in 2009.

Stosur is five from five against Errani and has won both encounters with Kerber – on clay last month in Stuttgart and in last year’s US Open semifinals.

Stosur’s match will be broadcast live on Fox Sports 3 and Fox Sports 3HD tonight from 10pm AEST, followed by all the other action from Day 10 at the French Open. For more information, please see our TV Guide.

Aussies in action on Day 10