Sam Stosur has passed a nerve-wracking fourth-round acid test against American Sloane Stephens to safely progress to the French Open quarterfinals in Paris. 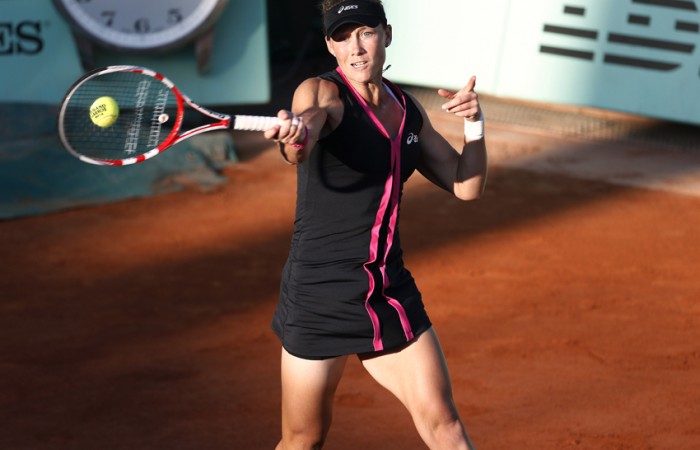 Sam Stosur has passed a nerve-wracking fourth-round acid test against American Sloane Stephens to safely progress to the French Open quarterfinals in Paris.

Stosur wriggled out of a first-set hole to beat talented teenager 7-5 6-4 and reach the last eight at Roland Garros for the third time in four years.

Australia’s 2010 runner-up will play Dominika Cibulkova on Tuesday for a semifinal spot after the Slovakian pocket rocket spectacularly knocked out world No.1 Victoria Azarenka earlier on Sunday.

Azarenka’s shock elimination spares Stosur a confrontation with the Belarusian, who has dominated the Queenslander in straight sets in all six of their career encounters.

The top seed’s departure has also left Stosur as the highest-ranked player in the top half of the draw – and the only one of the four to have experienced a grand slam final.

But the US Open champion was certainly made to sweat against Stephens, who had Stosur under pressure for the first time all tournament.

The 19-year-old broke Stosur in the seventh game of the match when the Australian made a string of careless errors from 40-15 up.

Unseeded Stephens had only dropped six points in her opening four service games before Stosur fired up to break back for 5-all.

Stosur had another lapse, though, from 30-love up and had to save two more break points to hold for 6-5.

With the opportunity lost for Stephens, the American coughed up two double-faults while serving to stay in the set, allowing Stosur to snatch it after 49 minutes.

Stosur raced to a 5-1 advantage in the second set, only to falter twice trying to serve out the match.

In the end, the world No.71 lost her nerve – and serve – in the 10th game of the set and three unforced errors allowed Stosur to advance after one hour and 23 minutes.

“She came out playing very well. I felt like I was struggling to kind of get into it, like I played a good point and a couple of bad ones.

“She came out playing very aggressive and kind of got me off guard.

“I went down that break and got a little bit mad with myself and then recomposed and, yeah, really tough to come back from 5-3.

“I think that 5-all game was huge for both of us. Luckily I was the one that got through and was able to step it up and get on a little bit of a roll.”

Now that she’s through, the sixth seed is favoured to qualify for her second final at Roland Garros following Azarenka’s surprise 6-2 7-6(4) loss.

Azarenka was badly off her game against Cibulkova, a semi-finalist in Paris in 2009 who had pushed her to a third set in their five previous matches but hadn’t beaten her since 2008 at Amelia Island – the last time they met on clay.

The Belarusian’s defeat ended her tournament before the quarterfinals for the fifth time in seven trips to the French capital.

“I’m going to kill myself,” said Azarenka when asked what she could do to recover from her demoralising departure.

“I don’t know how to describe my performance really today. It wasn’t satisfying at all.”