Sam Stosur is the last Australian remaining in singles at the French Open after Bernard Tomic and Jarmila Gajdosova fell in their second round matches. 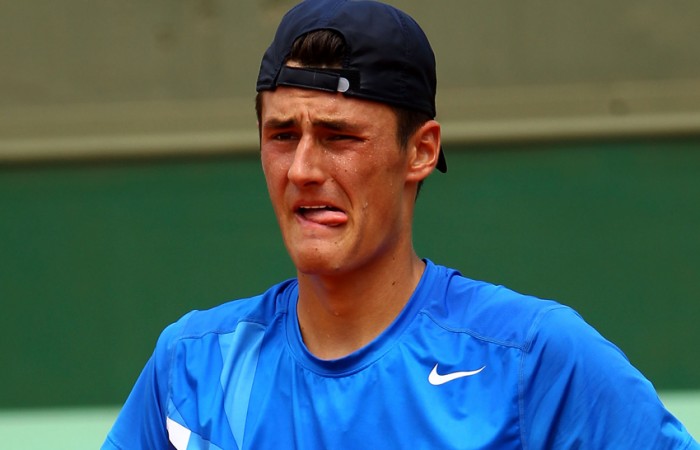 Sam Stosur is now the only Australian remaining in the singles competition at the French Open, after Bernard Tomic and Jarmila Gajdosova fell in their second round matches.

Gajdosova lost to Danish ninth seed Caroline Wozniacki, her sixth defeat from six matches against the former world No.1.

Playing on Court Philippe Chatrier, Gajdosova became more competitive as the match wore on but could not recover from her slow start, eventually falling 6-1 6-4.

Wozniacki next faces Estonian 23rd seed Kaia Kanepi on Saturday for a spot in the last 16.

Tomic, Australia’s last hope in the men’s singles draw fell in a straight-sets second-round loss to Santiago Giraldo, a lowly-ranked Colombian whom he beat just two weeks ago in Rome.

The 6-4 6-1 6-3 defeat meant there would not be a highly-anticipated Saturday showdown with the fourth-seeded Murray.

> see photos of Gajdosova, Tomic and other Aussies in action from the first round at Roland Garros

“It always happens when you think of that match ahead of you – it comes back and bites you,” Tomic said.

“That’s why you’ve just got to focus on the players ahead of you.

“I knew today was going to be tough if I was going to win, but he actually played well and broke my momentum sort of and there wasn’t really a lot I could do.

“My serve started collapsing and after that it was a one-way street for him after the second set.”

Instead of preparing for Murray, the teenage Wimbledon quarterfinalist may also need to head to the practice courts to iron out worrying kinks in his backhand before launching his grasscourt campaign next month in Eastbourne.

The 19-year-old’s double-fisted wing completely broke down, so alarmingly in fact that a frustrated Tomic at one stage – after one particular shot barely made it halfway up the net – fiddled with his racquet strings and asked them: `Why?”

Tomic won four straight points after the one-way conversation, but still lost the first set the following game when he fired another backhand long.

He had started brightly enough, unleashing a beautiful crosscourt forehand pass on the opening point of the match.

He then had three break points on Giraldo’s opening service game – but failed to convert and was immediately punished as the Colombian gained the ascendancy.

He broke Tomic in the third game with a backhand down the line to go 2-1 and that was all he needed to seize the early initiative.

He briefly raised hopes of an improbable comeback when he broke Giraldo for the first – and only – time in the third game of the third set.

Alas, Giraldo broke straight back for 2-2 and then again in the eighth game before serving out the match after one hour and 45 minutes.

All up, Tomic committed 32 unforced errors and was able to convert just one of 11 break-point chances, compared to Giraldo’s six-from-13 strike rate.

While Tomic was unable to dig himself out of a hole on court seven, Murray proved a modern-day Scottish braveheart on Philippe Chatrier after overcoming a debilitating back injury and a big early deficit against Jarkko Nieminen.

The Scot said that after he dropped the first in quick fashion his camp was telling him to retire from the match for fear of further aggravating his injury.