Bernard Tomic and Jarmila Gajdosova will attempt to join Sam Stosur in the third round at Roland Garros when they take to the court on Day 5 at the French Open. 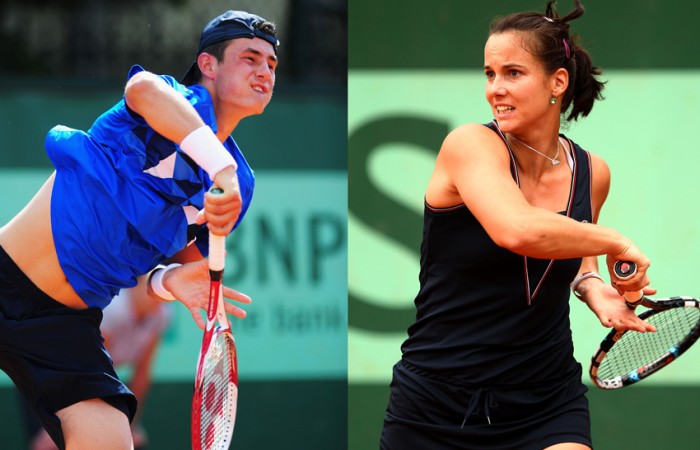 Australians Bernard Tomic and Jarmila Gajdosova will try and keep their French Open campaigns on track when they take to the courts for their second round matches on Thursday.

Gajdosova will be front and centre in Paris on Day 5 when she takes on ninth seed Caroline Wozniacki on Court Philippe Chatrier, hoping to join compatriot Sam Stosur in the third round of the women’s singles.

Yet kicking off the day will be Tomic, who opens proceedings on Court 7 against Colombian Santiago Giraldo, the winner booking a likely date in the final 32 with fourth seed Andy Murray.

Doubles action will continue in the French capital on Thursday, with several Aussies scheduled to play.

It will be a busy day for Gajdosova, who takes to the court following her singles match to contest her first round match in the mixed doubles competition, which begins on Day 5.

Gajdosova’s partner in the women’s doubles, Anastasia Rodionova, will also fly the Aussie flag in the mixed event when she pairs with Christopher Kas of Germany.

Tomic will add men’s doubles to his playing load on Thursday, partnering German Cedrik-Marcel Stebe. Matthew Ebden, Paul Hanley and Jordan Kerr will also strut their stuff in the first round of the men’s doubles.

Jarmila Gajdosova v Caroline Wozniacki [9] (DEN) – second round, Court Philippe Chatrier, second match
“We’ve had some very difficult matches the last two matches. For me, it’s about getting as many balls back and not allowing her to dictate because then things can go fast.” That was Wozniacki’s take on playing Gajdosova, who arrives in the second round after her first opponent retired with a back injury midway through the second set. Wozniacki had an even easier path, surrendering just one game to Greece’s Elini Daniilidou. Gajdosova and Wozniacki met three times in 2011, with the Dane scooping each encounter despite competitive play from the Aussie. In fact, Wozniacki has won all five meetings between the pair dating back to 2007. Yet Gajdosova meets Wozniacki at an opportune moment, with the former world No.1’s confidence comparatively low after slipping from top spot to her current mark of No.9 in just five months. While clay is not Wozniacki’s favourite surface, Gajdosova feels at home on the dirt, having reached the fourth and third rounds in her last two visits to Paris. With the Aussie looking to get back to the top 30 after falling to No.72, a good performance against Wozniacki could be the shot in the arm she needs.

Bernard Tomic [25] v Santiago Giraldo (COL) – second round, Court 7, first match
Tomic won his first career match at Roland Garros with a straight-set opening round victory, and will be looking to continue his improving form on clay when he takes on Giraldo, the world No.50 who’s gone an impressive 16-9 on dirt in 2012. Tomic himself has built a credible win-loss record on clay this season, the attention he has paid to enhancing his fitness and movement appearing to be paying off. The pair met recently on clay in Rome, a match which the Aussie claimed in three tight sets. The 25th seed will be hoping that the confidence drawn from that result will translate into their match-up in Paris, where a win would set up a likely – and tantalising – third-round showdown with fourth seed Andy Murray.