Sam Stosur's laid-back approach at the French Open, which has included riding her bike around Paris, is fascinating the locals. 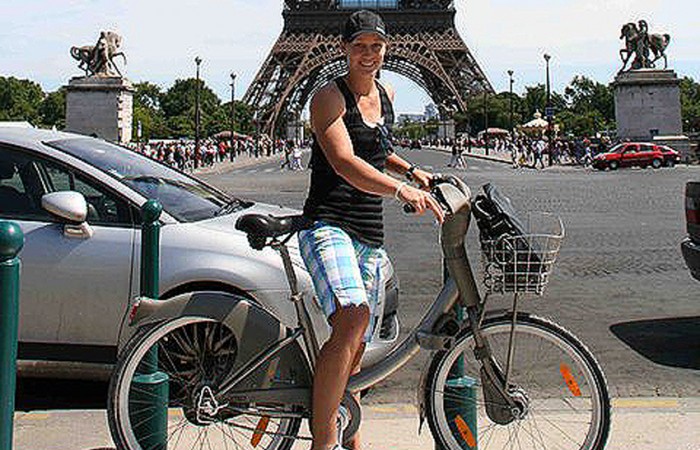 Samantha Stosur’s having a barbecue in Paris and everyone’s invited.

“Everyone can come. It’s my pleasure,” Stosur said when asked if her self-confessed fine culinary skills were up for the taste test.

Stosur, of course, was just being polite – as usual – but her laid-back approach at the French Open is fascinating the locals.

> Stosur cruises into third round

Ever since word got out that Stosur was riding around Paris on a rented bike, taking life into her own hands, fans and tennis folk alike have wanted to know why.

While most of her professional tennis peers are strictly business, safely under lock and key, Stosur says she’s simply trying to soak up the experience of being in one of the most beautiful cities in the world.

“I like to ride to dinner and back most nights,” the Queenslander said after coasting into the third round.

“I try to stay on the bike as much as possible. So far everyone’s been very polite on the road and it’s all been fine.”

Stosur is also enjoying the relative anonymity, though it’s not always possible to ride under the radar when you’re a former Roland Garros finalist.

> Vote for your favourite Australian moment at Roland Garros

“Last night, I kind of go around the corner and you feel a few people are turning their heads wondering is that her on her bike,” said the 2010 runner-up.

“But, no, I think you’ve got to have fun and enjoy where you are even if it is during a tournament.”

On nights in, Stosur turns master chef in her apartment in Passy, Paris’s swanky 16th arrondissement.

“I’ve made some nice steak and salad. A little bit boring but it’s been very tasty,” she said.

The 28-year-old’s relaxed attitude during the claycourt grand slam is a far cry from the stressed Stosur trying to win her home major in Australia earlier this year.

“Obviously January was quite difficult for me, and for sure I was probably a lot more uptight than what I am right now,” she said.

“I just struggled handling the occasion and what I thought I was going to be capable of. It didn’t happen.

“So then it’s always disappointing when you’re walking off the court and it doesn’t go the way that you wanted it to, or at least put in a good showing.

“But now I feel like that hasn’t happened for a long time and, yeah, I’m a lot more comfortable at the moment.”

You can catch Stosur in action on Day 6 at the French Open, which will be telecast live on Friday from 7pm AEST on Fox Sports 3. Please visit our TV Guide for more information.