Aussies Ashleigh Barty and Jarmila Gajdosova on Tuesday will aim to join compatriots Sam Stosur and Bernard Tomic in the French Open second round. 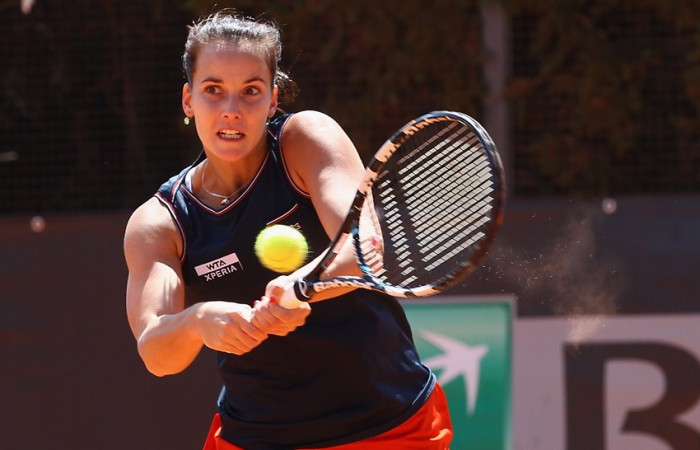 Australians Ashleigh Barty and Jarmila Gajdosova will take to the red clay of Roland Garros on Tuesday, hoping to join compatriots Sam Stosur and Bernard Tomic in the second round of the French Open.

Barty, a 16-year-old wildcard into the main draw, has been thrust into the deep end in her Paris debut, scheduled to face No.4 seed and reigning Wimbledon champion Petra Kvitova on Court Suzanne Lenglen.

Gajdosova, who reached the fourth round as a wildcard herself in 2010, has been given a slightly more fortunate draw in the form of  unseeded Slovak Magdalena Rybarikova.

Although Casey Dellacqua, Anastasia Rodionova, Lleyton Hewitt and Matthew Ebden are gone from the singles competition, the Aussies will get their chance to shine in the tandem game, with doubles play to kick off on Day 3.

First off the mark will be Stosur and Dellacqua, who are teaming with German Julia Goerges and Russian Alexandra Panova respectively.

Tune in to Fox Sports 3 tonight to catch all the live action from 7pm AEST. For more information, see our TV Guide.

Ashleigh Barty [WC] v Petra Kvitova [4] (CZE) – first round, Court Suzanne Lenglen, first match
A baptism of fire for the young Aussie, Barty has drawn one of the biggest names in the women’s game, and will be thrust into the spotlight on Roland Garros’ second-largest stadium court. Kvitova is the reigning Wimbledon champion and was just a whisker from becoming the world No.1 in January this year. Her wicked lefty serve and booming groundstrokes translate well to any surface – she reached the fourth round at Roland Garros last year. Yet after claiming six titles in 2011, Kvitova has gone off the boil this season, failing to reach a tournament final and recording patchy results in her claycourt lead-up to Roland Garros. Barty, with absolutely nothing to lose, can come out swinging against a player with all the pressure on her shoulders. With an intelligent game, ever-improving serve, fitness and movement, and with a Grand Slam title of her own under her belt (junior Wimbledon 2011), the prodigious Aussie could cause the world No.4 some problems in her French Open debut.

Jarmila Gajdosova v Magdalena Rybarikova (SVK) – first round, Court 5, fourth match
Formerly compatriots until Gajdosova officially switched her allegiance to Australia in 2009, Gajdosova and Rybarikova have meet twice prior to their French Open battle this year, with one win apiece. Yet it was the Aussie who claimed their only meeting on clay, in Estoril two years ago. Gajdosova has not looked overly convincing in 2012, slipping from No.33 at the beginning of the season to her current mark of No.72, and winning just one of five matches at claycourt tournaments leading into Paris. Yet another significant win was wedged into that period – a straight-set destruction of higher-ranked Julia Goerges in Australia’s Fed Cup tie against Germany in Stuttgart. She’ll be hoping to take confidence from that result into her match against Rybarikova, ranked world No.107. The winner faces a likely battle with Caroline Wozniacki.