After falling to the Serb in last year's final, Rafael Nadal avenged that loss with a straight set defeat of Novak Djokovic in the final of the Rome Masters. 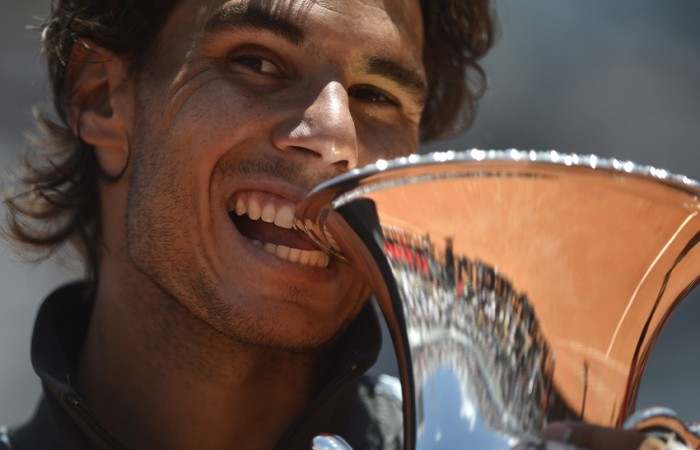 Rafael Nadal won his sixth Rome Masters title in a rain-postponed final against Novak Djokovic on Monday, defeating the world No.1 7-5 6-3.

It was sweet revenge for a straight sets loss to the Serb in last year’s final and the win means that he will move back ahead of Roger Federer at number two in the world rankings.

“I’m happy that I won in Rome without losing a set,” said Nadal. “I was facing some of the best players of the world this week.

It was also the perfect preparation for the defence of his French Open title with the tournament due to get underway in Paris on Sunday.
So far this season Nadal has won claycourt titles in Monte Carlo, Barcelona and Rome with his only loss coming in Madrid where he went down to compatriot Fernando Verdasco.

“He is always the favourite, even if I’ve won against him seven times (2011 finals),” said Djokovic, who now trails their head-to-head rivalry 18-14.

“He is the best player in the world on this surface.”

Djokovic failed to win a claycourt title ahead of Roland Garros where he is aiming to make it four Grand Slam titles in a row after winning Wimbledon and the US Open crowns last year and the Australian Open early this year.

Nadal stands 16-1 on clay this season after winning the 49th title of his career. He is 35-4 in finals on clay and moved back into the lead in career Masters 1000 trophies on 21, with Federer on 20 after his Madrid title of eight days ago.

The victory prevented Djokovic from a Foro Italico hat-trick, after he won the event in 2008 and 2011.

“If you don’t use the opportunities against Rafa he gets the momentum on his side and plays better,” said Djokovic, who said he is pleased with his week despite the concluding defeat.

“I made a lot of unforced errors today. In my opinion, he didn’t have to play his best, I made a lot of errors and that cannot happen when you play Nadal.”

Nadal said that he was pleased to have been able to come back on a dry day to play the final, his last tournament preparation for the major.

“We were here until 8.15 last night and we played today because we love this tournament. Yesterday the conditions were not perfect. The ATP made the right situation.”