Tennis a vehicle for creating better lives for Indigenous kids

If indigenous athletes can dominate in countless sports, Evonne Goolagong Cawley sees no reason why they can't be excelling on tennis courts too. 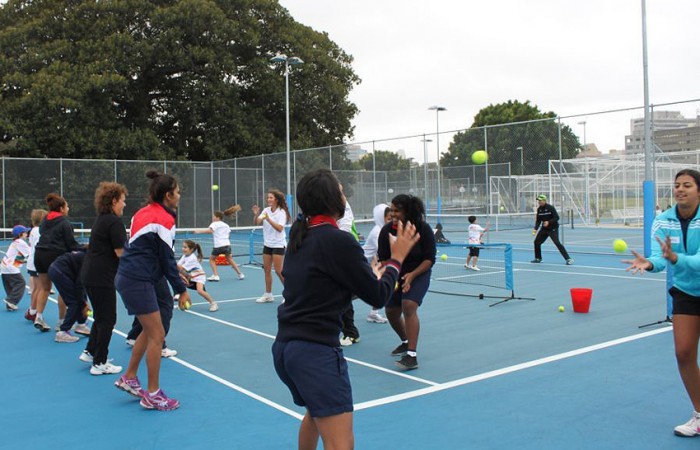 If indigenous athletes can dominate in the football codes and countless other sports, Evonne Goolagong Cawley sees no reason why they can’t be excelling on tennis courts too.

The great Goolagong Cawley showed what’s possible, of course, during an illustrious career that featured seven grand slam singles triumphs and a stint as world No.1 in 1976.

Thirty-six years on and Ashleigh Barty is following in her footsteps, the gifted teenager winning junior Wimbledon last year at just 15 and preparing to make her French Open main draw debut next week in Paris.

Goolagong Cawley and Barty, though, are rare exceptions, with less than 50 indigenous juniors said to be currently competing in tournaments across Australia.

Hence why Goolagong Cawley – in conjunction with Tennis Australia and the government – has launched the Learn Earn Legend! program, an initiative aimed at attracting more indigenous youngsters to the game.

“That’s what this program is about – come in, have a try at tennis,” Goolagong Cawley told AAP.

“We see a lot of boys playing football and AFL and they’re really good athletes. A lot of them have got great hand-eye coordination. They’re great natural athletes.

“Those same natural athletes can be tennis players too.”

But introducing children to tennis is only part of the program.

Goolagong Cawley’s prime motivation is to encourage and support young indigenous Australians to stay at school, get a job and “be a legend for themselves, their family and their community”.

“Basically we’re using tennis as a vehicle to create better education and health,” she said.

“I remember when I was growing up in Barellan, I was very shy, very scared. But once I played sport – I did athletics, I did everything, I was quite fast – that gave me the confidence to talk to people and to go do my school work, then (play) sport.

“So this is a similar vehicle.”

Goolagong Cawley hopes to reach about 1200 children nationally this year with a series of Tennis Come and Try Days in every state.

The NSW launch took place in Sydney on Sunday and further clinics will be held in Grafton on Thursday and at Goolagong Cawley’s birth place of Griffith on Saturday.

The Learn Earn Legend! program identifies talented and ambitious indigenous youngsters and provides them initially with racquets and coaching.

Ultimately around 20 children from each state will receive scholarships to help them advance in life – off court and in some cases on it as well.

“Fifteen girls from our program are going to Pymble Ladies’ College and two of those girls are going to university, so they’ve come all the way through,” Goolagong Cawley said.

“We are looking for ones who want to help themselves.

“My dream is to see as many indigenous kids playing as possible and getting out there and having fun and hopefully they will want to come back.

“It’s all about creating better lives. Sport is a great way in really – but preferably tennis.

“So you never know, we might find that next champion along the way.

“But it’s not just about on the tennis court.”

The tennis legend nominated 22-year-old Kyah Stewart – the face of the program – as a shining example of the scheme.

Goolagong Cawley, who initially founded the Goolagong National Development Camp in 2005 after years of providing racquets and encouragement to indigenous children, first came across Stewart as an eight-year-old.

“She actually played tournaments and could have been No.1 in Australia,” Goolagong Cawley said.

“But she didn’t want to do that. She said I want to do what you’re doing and work with kids.

“She became a coach, worked in sports and as a rec officer for Newcastle and won the indigenous employer of the year award last year.

“She’s a wonderful example of what can be achieved if given an opportunity.”