Maria Sharapova has defended her Rome Masters title in gritty style, surviving persistent rain and noise as well as a set and 4-0 deficit to prevail over Li Na. 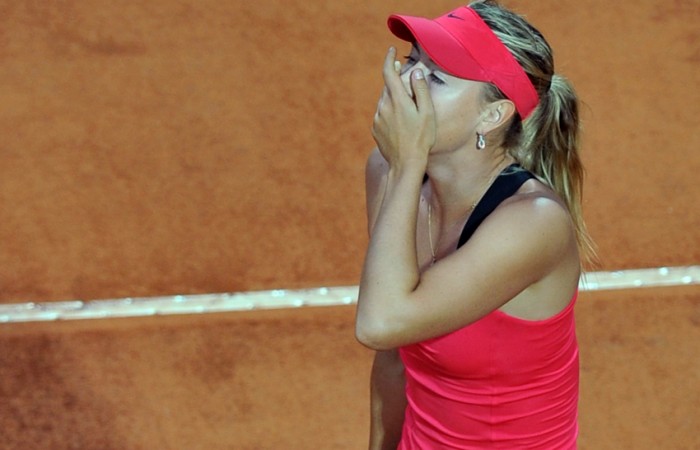 The world No.2 claimed the 26th trophy of her career, but it was a struggle for the Russian who found herself 6-4 4-0 down before the players were forced off by rain for over two hours just as the final set tiebreak was about to commence.

“It was a crazy match,” said Sharapova. “Either one of us could have own it. There really is no loser.”

Their battle was punctuated by noise from fireworks and helicopters as police kept an eye on rival football supporters heading for Sunday night’s Italian Cup final between Juventus and Napoli at the Olympic Stadium, just a few hundred metres from the tennis arena.

“The match was a joke, it was like playing a football match in the rain,” said Li.

“Even when we were sent off court, you had to still concentrate for every second, it was tiring for both players.

“You could not relax. It was tense. When we came back out, she was the tougher player. But I take some positives away. It’s getting close to Roland Garros and I think I hit the ball well. I also moved her around the court well.”

Officials, faced with a forecast of more rain, decided to postpone the men’s final between defending champion Novak Djokovic and Rafael Nadal until Monday afternoon.

Sharapova and Li were sent off court with the third set poised at a tiebreaker to decide the match. They came back more than two hours later and played seven additional minutes before Sharapova prevailed.

The Russian looked flat in the first set, losing an early break and the set.

With Li leading a set and 4-0, the momentum suddenly shifted as Sharapova woke up to reel off eight consecutive games, winning the second set to level and going 2-0 up in the third as Li’s famed problems with finishing off wins surfaced again.

But Sharapova suddenly went off the boil, reaching 4-1 but then dropping two serves as Li recovered.

As steady rain fell, the determined pair played on, with a brief stoppage at the two-and-a-half-hour mark while players sat in their chairs.

Once it resumed, neither seemed inclined to close it out, with Sharapova saving a match point in the 12th game from a forehand winner.

As the tiebreak arrived so did more rain, which forced the players off court and brought the covers on.