Australian Rules footballer Michael Hurley believes that Cardio Tennis is a great way to get people off the couch and leading a healthier lifestyle. 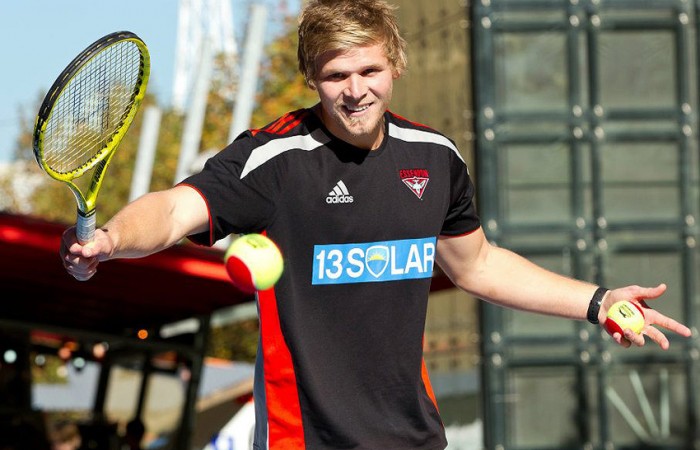 Aussie Rules footballers are some of the fittest elite athletes going around. The demands of the sport require an extraordinary commitment from players to training both on the track and in the gym, in order to get themselves in peak condition for their battles on the football field.

Essendon forward Michael Hurley is no exception. The 21-year-old, who last year finished third in his club’s Best and Fairest, was at Melbourne’s City Square recently to participate in a Cardio Tennis demonstration. He says that with the intensity and focus required to train as an elite footballer, Cardio Tennis was a good option for possibly adding a new element to his training.

“I think you could put it in there. You’d have to make it a touch more vigorous for an elite athlete but I think something like that (would be good) to change it up and get a bit of a sweat up, so it’d be good,” he says.

“I think the boys down at Essendon would love it.”

Tennis is something Hurley has become increasingly familiar with, as both he and teammate Dyson Heppell are currently undertaking a sports management traineeship at Tennis Australia.

Exposed to areas such as high performance training and talent identification and management, as well as Tennis Australia’s various programs for introducing the sport to people of all ages and backgrounds, Hurley says the traineeship is a great opportunity to learn about a different sport and how it’s run.

“It’s quite easy to get caught up in footy and it’s always nice to have something different,” he says.

“The pathway for a tennis player is so different to a football player. (In tennis) they’re identifying kids from around ages six to 10, and they’re almost elite athletes at age 12 … It’s a unique sport, it’s one that I think anyone can play and it’s very enjoyable.”

Unlike tennis’s elite player development pathway, Cardio Tennis is an exercise program open to people of all playing standards and fitness levels.

The accessibility of the program, and the fact that you don’t need a sporting background to enjoy the benefits, is one of the things about Cardio Tennis that appeals to Hurley.

“It’s pretty easy. All you need is a racquet and a ball, so you don’t need much, just a bit of spare time and a few friends together and it’s pretty simple,” he explains.

“I think the aerobic exercise side of things is fantastic. It’s a good way to get people off the couch and into some activity.”

“I think Dys (Dyson Heppell) and I will get out when we’re both fit and have a bit of a run around and see how it all works.”

For more information on the Cardio Tennis program and the various benefits it can provide for your health, visit www.cardiotennis.com.au.