An iconic pair of Olympic rings will adorn a new footbridge linking the new Eastern Plaza with AAMI Park, as part of the Melbourne Park redevelopment. 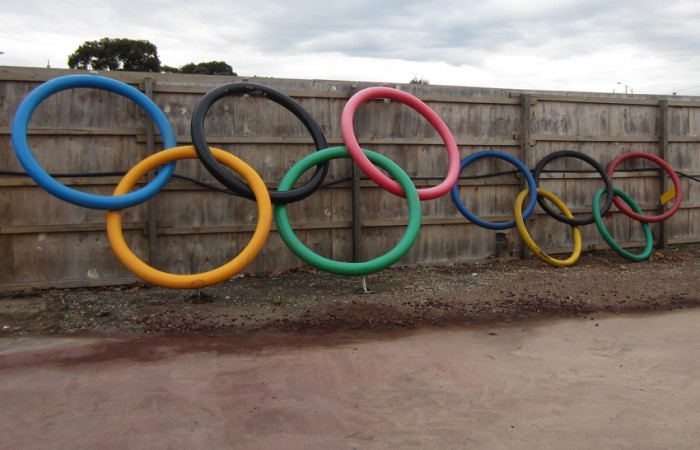 A pair of iconic Olympic rings will adorn a new footbridge linking Melbourne Park’s new Eastern Plaza with AAMI Park, as part of the multi-million dollar redevelopment of Melbourne Park.

The rings were prominently displayed during the 1956 Olympic Games in Melbourne, with one pair on the Olympic velodrome grandstand (a site now occupied by AAMI Park) while the other was positioned on the grandstand of the Olympic Park warm-up track.

Since the 1956 games one pair of rings has been displayed at Olympic Park while the other was moved into storage.

Following the demolition of Olympic Park, the pair of rings will be refurbished later this year before being installed on the footbridge, which is expected to be completed in time for the Australian Open in 2015.

Interestingly, one pair of rings contains a design flaw – looking from left to right, the blue ring is first looped over the yellow ring, then under it, when in fact the official arrangement of the Olympic rings has the blue ring looped under, then over. Another error exists in the order of the looping of the black and green rings.

The rings were designed by Olympic Games founder Pierre de Coubertin, symbolising the five main regions of the world – Europe, the Americas, Africa, Asia and Oceania – and using colours common to national flags in the 1900s.

Various arrangements of the rings, both correct and incorrect, were approved at the Melbourne games as well as the 1932 Los Angeles games and 1948 London games before it, making it a quirky part of Melbourne’s sporting history to grace the new footbridge.

The bridge will slope upward from the Eastern Plaza over Olympic Boulevard and join existing the concourse alongside AAMI Park, providing an uninterrupted pedestrian link throughout Melbourne’s main sporting precinct of AAMI Park, Melbourne Park and the MCG.

The latter is connected to Melbourne Park via an existing footbridge that commences outside the MCG’s Southern Stand.

The Eastern Plaza forms a key part of the $363 million first stage of the Melbourne Park redevelopment, ensuring the future of the Australian Open in Melbourne for years to come.

Training facilities will be available to elite and emerging Australian tennis talent, and will include eight new indoor and 13 new outdoor tennis courts – including eight clay courts – as well as an indoor running track, recover pools, treatment rooms and video playback facilities for game analysis.