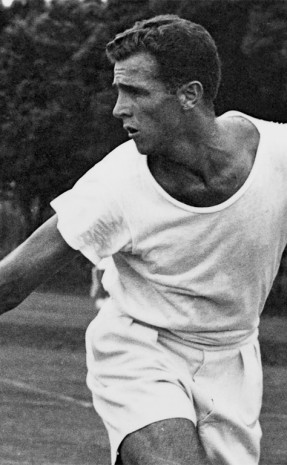 Winner of nine major titles, Ken McGregor completed the doubles Grand Slam in 1951 with Frank Sedgman. Starting at the 1951 Australian Championships, the pair won seven consecutive majors together – a feat that has never been equalled. McGregor was a tall, big-serving volleyer who was a surprise selection in Australia’s 1950 Davis Cup team. The selection was proved correct when McGregor won his first singles rubber and helped Australia to victory over the United States. Between 1950 and 1952 McGregor made the final of the Australian Championships, winning in 1952 against his doubles partner, Sedgman. He lost the 1950 final to Sedgman and the 1951 Australian and Wimbledon finals to American Dick Savitt. McGregor retired from tennis at 25 to play Australian Rules football, playing five seasons for West Adelaide in the SANFL.

Ken McGregor in the news

As we count down to French Open 2012, tennis.com.au will feature some of the best Australian achievements at Roland Garros.
Read more
read more articles