A history-making day for Australia has seen both Bernard Tomic and Marinko Matosevic advance to the quarterfinals at the BMW Open in Munich. 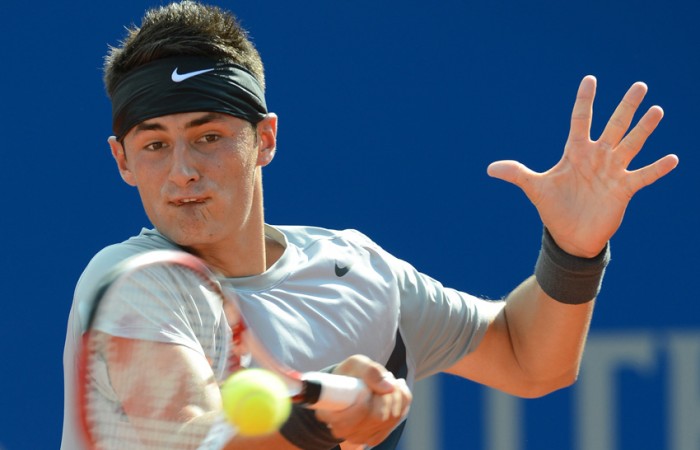 Bernard Tomic and Marinko Matosevic broke a 16-year Australian drought to reach the quarterfinals of the ATP Tour event in Munich.

Both dominated their opening sets, lost the second in tiebreakers and recovered in the third to record fighting second-round victories.

The fifth-seeded Tomic beat Potito Starace of Italy 6-1 6-7(4) 6-3 to make his first career quarterfinal on clay, while Matosevic defeated fellow qualifier Robert Farah of Colombia 6-1 6-7(2) 6-2 in his maiden event on the surface.

The duo’s progress marks the first time in 16 years two Australians have made the quarterfinals of an ATP claycourt tournament.

Back in 1996, Jason Stoltenberg won the Coral Springs title in Florida, while fellow Australians Sandon Stolle and Michael Tebbutt also made the last eight.

Tomic was down a break of serve at the start of the final set before peeling off six of the last seven games to prevail over Starace in just over two hours.

“I played very well in the first set and had chances to be up early in that second set,” said Tomic.

“I think that could have made a difference to not play three sets. He started playing good in the third and I was down a break, so it was good for me to get back and I played well in the end.

“My claycourt game has struggled in the past few years. Now, to win back-to-back matches at the same tournament is huge for me so I’m going to keep going and hopefully next round I can win too.”

Tomic next goes against Feliciano Lopez, the second-seeded Spaniard who beat Sergiy Stakhovsky of Ukraine 6-4 7-6(4).

Kohlschreiber and Lopez had byes into the second round.

In the other quarter-finals, third-seeded Marin Cilic of Croatia plays sixth-seeded Mikhail Youzhny of Russia and eighth-seeded Marcos Baghdatis of Cyprus meets Tommy Haas of Germany.